Guncraft has been released through direct sales from developer Exato, but the game will be hitting Steam on the 9th August 2013. In the short week that the game has been commercially available, however, players have made some wild stuff using the Gunsmithing tool, voxel importer and level builder.

Voxel-based Minecraft-esque shooter Guncraft will be digitally launching August 9th on Steam having cleared the Greenlight community with some very enthusiastic thumbs up. New features on the way.

There'll be Steam achievements, leaderboards, a racing mode, and trading cards with the final two of the deck thrown over to the community to decide upon. It'll go on sale for $14.99.

Guncraft, Homesick, Day One : Garry's Incident and five other titles have just been announced as Greenlit for Steam when they're ready to roll. There's also three new bits of software having passed the test.

So popular is the Greenlight system for Steam that more frequent updates have become a necessity. It's the go to place for indies especially to showcase their projects and hopefully get on Steam.

Exato Game Studios has announced that its voxel-based first person shooter Guncraft - basically Battlefield meets Minecraft - will be arriving on the 11th July 2013. 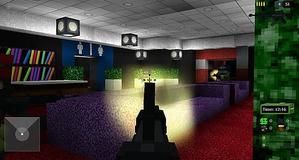