As the famous song said, don't rock the boat...

Administrators have confirmed that Dark Energy Digital, creators of Hydrophobia, is on the road to closure. As of March 16th they moved in to begin shutting down the company.

The Hydrophobia IP could remain with its creators who formed Dark Energy Publishing in January. The poor sales of the game crippled the studio. Their 'water engine' is another asset.

Developer Dark Energy Digital has issued redundancy notices to staff and last week administrators were called in for the shutdown process to begin. Hydrophobia was meant as a trilogy.

It was originally a boxed product for consoles but made the switch to digital. Hydrophobia began at Blade Interactive which closed in 08, but the owners founded Dark Energy Digital.

Xbox 360 has had Hydrophobia all to itself but now developer Dark Energy Digital announce it will be arriving on PS3 and PC too, with about 70% new stuff.

Existing levels have been reworked they reveal and sports a "proper, dramatic new ending" along with new voice actors. Hydrophobia Prophecy is the name. 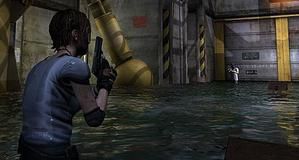