Ken Follett's Pillars Of The Earth Continues On December 13

The second episode of Daedalic's adventure game adaptation of Ken Follett's epic, Book 2 - Sowing The Wind, will be out on Steam first and GOG later in the month.

Ken Follett's The Pillars of the Earth Gameplay, System Requirements, Release Date - Everything We Know So Far

Ken Follett's The Pillars of the Earth is nearing the release of its first 'book'. Spanning from the world of Ken Follett's 1000+ long 1989 novel, this upcoming adventure game is set to turn the tale of a 12th century village on its head by enabling the narrative to branch off as a consequence of player interaction.

The Pillars of the Earth has seen a place on GameWatcher a number of times over the last couple of months. Standing out with its interesting art-style and take on a beloved literature classic, it's something to keep an eye on for sure. Especially with its release date set just two months from now.

There's no shortage of mainstream and classic literature being turned into engaging video games as of late. Of course, we're seeing it form around comics and graphic novels more, but Daedalic Entertainment is going for a more niché approach by handling Ken Follett's Pillars of the Earth. 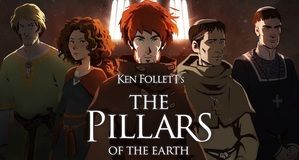