Publisher Raw Fury has announced that it has purchased the Kingdom IP from indie developer Thomas van den Berg, with the second game in the series, Kingdom: New Lands, landing on the Epic Games Store on June 6.

Developers Licorice and Noio rolled out their new creation on Steam today: Kingdom. The game is a pixelated side-scroller set in medieval times. You take on the role of a king or queen, traveling through the land on horseback and collecting coins and allies to build your kingdom.

Kingdom started out life as a very interesting little side-scrolling browser game, in which you played a king who spent his time wandering across his lands, ordering peasants around and trying not to get eaten by troll-monsters.

Publisher Raw Fury has picked up the game and helped developers Noio and Licorice turn it into a fully-featured experience, and it's almost ready to launch - the final release date has been set for October 21. 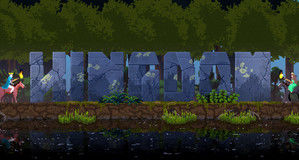