Bitsquid has announced that its proprietary game engine is now available for development in PlayStation 4 games. The engine has been used in such games as The War of the Roses, Stone Giant and Krater.

Krater gets co-op mode on the 23rd October

Developer Fatshark has announced that co-op will be coming to their sci-fi action-RPG Krater on the 23rd October in the form of free downloadable content.

We can build and "switch in and out" squad members for varying encounters. The "base pillars" of Krater are "crafting, exploration and consequence." Beware injuries and death!

Swedish indie developer Fatshark has announced that their sci-fi action-RPG Krater will be landing on the 12th June; a Mac OS version will follow in July.

Krater can best be described as "Diablo in space", complete with crafting and exploration, as well as a meaty skill-based leveling system the developer describes as "consequence". 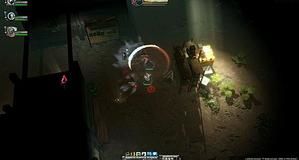