Legend of Grimrock 2 is on the way to feed the PC community it's retro dungeon-crawling appetite, and now developer Almost Human has revealed more about the sequel and includes some new screenshots.

Four prisoners are stranded on the Isle of Nex, which is a "secluded island faraway". Outdoor and indoor locations switch "seamlessly" in this "perfect microcosm".

Legend of Grimrock getting dungeon editor

3D dungeon crawler Legend of Grimrock will be getting a level editor later today, according to developer Almost Human.

Legend of Grimrock patch due this week, dev cost covered "many times over"

Finnish developer Almost Human of old school dungeon crawler Legend of Grimrock should be posting the first official patch for the game sometime this week, addressing some niggles.

Esc key to close that character screen? Yes please. The future of the studio "seems pretty secure" after the tremendous sales for the digital title, which dominated Steam's top seller list.

Developer Almost Human has announced that their third person dungeon crawl Legend of Grimrock is now available for preorder, at 20% off the retail price. 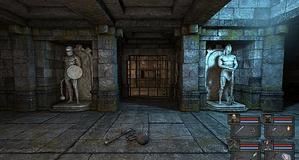