The Ostfront Veteranen expansion introduces a brand new German faction to blow stuff up with.

The first DLC for Men of War: Assault Squad 2 has just been unveiled by 1C Company, and it's called Iron Fist. New features and single player content are on offer, including a DirectX 10 upgrade.

For all who pre-purchase Men of War: Assault Squad 2 the beta is now available to enjoy, but indie developer Digitalmindsoft warns it's a rough road ahead for early adopters. They'll gradually expand the beta.

Assault Squad 2 uses a different engine than the first and the team are still hammering out the kinks, but it does bring with it multi-core threading and fancy shaders. Stability their main concern.

Publisher 1C Company has announced that Men of War: Assault Squad 2 will now be releasing on PC March 20th, as they want more time to hammer out the "best possible Men of War game".

It was originally scheduled to be out in a couple of weeks on February 20th, but the real-time strategy has a number month in trenches before it charges for desktops. 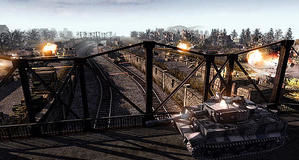