It's based in Prague and they're working on an unannounced RPG. They're website teased it won't "disappoint fans of open realistic worlds". Warhorse is hiring.

Bohemia Interactive, the creator and original developer for Operation Flashpoint has announced their first title in the series will be re-released.

The original released under Codemasters is "now discontinued." Owners of Cold War Crisis and the GotY edition get the new ArmA: Cold War Assault free. 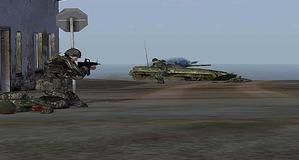