Playing God is harder than it looks.

Reus developer Abbey Games is celebrating their first Alpha milestone, and have released a new Alpha gameplay teaser for the 19th turn-based strategy. They've traded in godhood for the "age of discovery and adventure."

The small developer will be attending the Indie MEGABOOTH at PAX East in Boston, MA March 6-8 where the Alpha build of the turn-based game will be playable for the first time.

Reus creator Abbey Games is taking a break from the world-creating titans genre, and is now looking to take "a motley crew and a mighty ship" to explore the unknown in the 19th century. It's a battle of antiquity.

We get our crew together to go discover what's yet to be put on the map, as we compete against our fellow Victorian treasure seekers. Abbey blends "reality and myth" with Renowned Explorers.

Abbey Games has announced that the 1.2 update for their 2D god game Reus is now live, and it adds a host of game play options, including the ability to change the planet size, the pace of the game, and other settings. New challenge modes including "Titan mode" (an iron man mode) and the ability to pause toggled off. 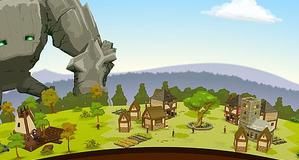