We're Giving Away 5 Free Copies Of SteamWorld Dig 2 - And It Couldn't Be Easier To Enter!

Whether you're looking out for something new and unique, or a fan of the series as a whole, the impending release of SteamWorld Dig 2 has many people excited. If you'd like to join them on some steampunk platforming, you need only test your luck with our latest giveaway.

SteamWorld Dig developer Image & Form is taking the series in a new direction with SteamWorld Heist, a turn-based strategy effort that puts you in charge of a team of robot scavengers.

The studio's released the very first gameplay trailer today, and it's looking pretty darned sharp. I didn't know how much I wanted to play a roguish robot space-captain until now.

SteamWorld Dig's creator Image & Form have just announced what's next in the SteamWorld universe. Originally on Nintendo 3DS, the series is arriving straight away on PC with SteamWorld Heist.

They swap platforming for turn-based 2D combat as we put together a team of 'ragtag robots' as crew for our steam-driven spaceships. We'll be heisting rivals for loot.

Steamworld Dig coming to Steam on the 5th December 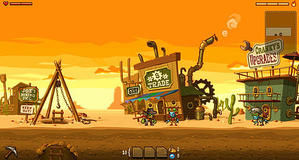