In a quiet update to its website last week, developer Starbreeze debuted a new co-op shooter know as Storm.

Total War console interface "actually solved" but 'would it sell?'

Developer Creative Assembly still has ideas for the Total War franchise getting to consoles, at least in their periphery. The control scheme is 'already done'.

It's actually a matter of would it "sell on console?" It's RTS with a love of history and deeply rooted to PC. They're "looking at everything" for the future. 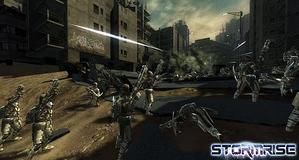