Publisher Rebellion plans on bringing The Bitmap Brothers' classic titles to new platforms and create new ones for the studio's various classic series.

Mastertronic and Abstraction Games announce they're dusting off The Bitmap Brothers' Amiga top-down shooter The Chaos Engine. In fact it will be releasing August 29th for PC, Mac and Linux.

It's been built from the ground up "in its original form," and features alternate modes and enhancements. It's set during the Victorian era where an early computer went wrong. 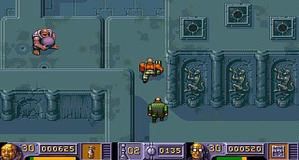