Hearthstone has had a solid run as the undisputed king of digital deck-builders, but it’s about time some competitors gave Blizzard a run for its money. We’ve been looking forward to seeing how Blizzard’s Elder Scrolls: Legends would shape up ever since its announcement last year, and it’s now finally in open beta for us all to check out.

Bethesda has announced that worldwide beta registration is now open for The Elder Scrolls: Legends, a free-to-play strategy card game based on the Elder Scrolls series. You'll be pleased to know that from today a selected few will be able to play the game in a closed beta, with additional players being invited in the next few months.

Legends explores the characters, creatures, deities, and lore from across the The Elder Scrolls franchise.

“As a fan of digital strategy card games, I’m especially excited about having people play Legends,” said Pete Hines, Vice President of PR and Marketing at Bethesda Softworks. “We’re looking forward to hearing their feedback and having them help us shape the future of the game. “

The Elder Scrolls: Legends doesn't have a definitive release date yet, although it will be available for the PC and iPad. Check out the first gameplay overview trailer below:

The Elder Scrolls: Legends F2P card game pushed back to 2016

Remember The Elder Scrolls: Legends? It's a virtual card game from Bethesda based around their iconic Elder Scrolls series. Originally it was slated to come out this year, but those plans have gone by the wayside it seems. The game is being pushed back to 2016.

Bethesda are working on a digital card game set in the Elder Scrolls universe, which looks to be the publisher's answer to Blizzard's Hearthstone success.

Called The Elder Scrolls Legends, it will be a free-to-play title that is expected to be released later this year for the iPad and PC. 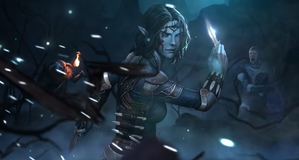