The Lord of the Rings Online: Riders of Rohan Latest Updates

Riders of Rohan expansion for LOTRO delayed to February

Turbine has announced that the Riders of Rohan expansion for their free-to-play Tolkein-licensed MMO The Lord of the Rings Online, which was supposed to be released on the 15th October, has been delayed til February 2013.

The Lord of the Rings Online: Riders of Rohan Essentials 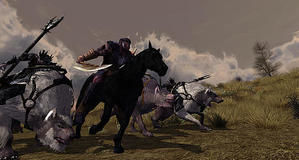