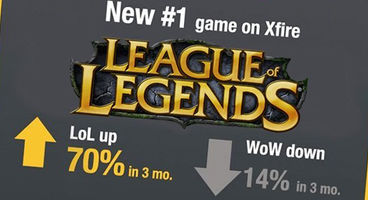 The group uses the measure of daily active unique (DAU) users accessing their services, and WoW has seen a 14% decrease of traffic over the past three months.

In September 2009 there were around 60k daily DAU users for Blizzard's MMO, but now its half that. Riot Games' League of Legends meanwhile has risen 70% in the past three months, increasing by around 34k daily DAU users.

"Our 19 million users have avidly played World of Warcraft for the past seven years; we knew it would eventually be overtaken but what really surprised us was the rapid ascension of League of Legends and Free2Play games in general,” said Xfire's Mark Donovan.

“The Free2Play model is becoming much more prolific in the gaming industry, and one major trend we’re seeing is that there are a vast number of games initially developed as subscription titles that failed to gain critical mass, then re-launched with a Free2Play model with great success. Results from many Free2Play games, including GamersFirst’s All Points Bulletin: Reloaded and Turbine’s Lord of the Rings Online have been extremely positive.”

BioWare's Star Wars: The Old Republic also made the switch to free-to-play after subscription numbers just weren't 'WoW'ing' the accounts department. Even World of Warcraft has adopted a degree of F2P. Recent figures from Activision Blizzard show WoW's subscription levels are back down in the 8 million range, as they shed 1.3m in Q1 this fiscal.

Xfire has released an infographic to illustrate some of the numbers.