The "untold journey" of The Walking Dead's Michonne from the comic series is the feature of Telltale Games' latest in the franchise. The Walking Dead: Michonne is a mini-series exploring what happens between issue #126 and #136.

Fans will learn "what took Michonne away" from her trusted group, and what brings her back. Series creator Robert Kirkman calls her "a reflection" of The Walking Dead world itself. She'll "bridge that gap" between comic and game. 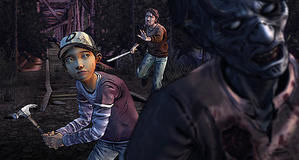