That means you don't need to try and hunt down that 1996 disc of the original MS-DOS running Tomb Raider. We can take on dinosaurs, mansion training courses and the end of world digitally.

Square Enix's house of all things Lara Croft - Crystal Dynamics - has been joined by God of War director Cory Barlog. He'll be involved in a new Tomb Raider project in San Francisco.

There's also a "yet to be announced new title." Barlog was writer/director for God of War 2 and creative director for Chains of Olympus, and steered Ghost of Sparta's narrative.

What's in store this chilly December month for Sony's PlayStation Plus subscribers? Well this week Tomb Raider: Underworld is completely free, as are PS one Spyro games.

Next week PSN's Marvel Pinball is free of charge. Also running for December are a number of heavy discounts for Plus users, for full PS3 games and PSN releases. Check the calendar. 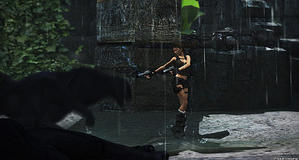