Railsimulator.com has announced that the Marias Pass expansion pack is now available for Train Simulator 2013. The DLC features 152 miles of track in the Northwestern United States as well as 8 scenarios which challenges players to engineer heavy freight through the varied terrain and treacherous weather.

RailSimulator.com has announced the Halloween-themed standalone expansion to Train Simulator 2013, Trains Vs. Zombies 2; the expansion does not need the original game to play.

RailSimulator.com has announced that the Deluxe Edition of Train Simulator 2013 is now available on Steam, and includes additional content. The bonus content includes the Sherman Hill route from Cheyenne to Laramie, Wyoming, as well as the London-Brighton line. Finally, the highlight of the bonus content is the Munich to Augsburg route, featuring the 320kph ICE3 express train.

RailSimulator.com has announced that the latest edition of their train simulation series, Train Simulator 2013, is now available for pre-order, a week before its worldwide release on the 20th September 2012. Gamers who preorder will receive a 10% discount. 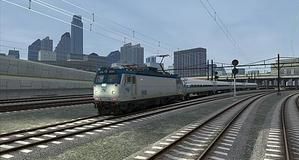