To celebrate the UK launch of the film, Strategy Informer brings you its verdict on the tie-in game, Tron: Evolution...

Disney's new "strategic direction" is as a digital-only publisher

As much as half of the 700 developers at Disney Interactive Studios may have been cut from the workforce as they go through this "restructuring process."

It comes as no surprise to hear that Propaganda Games, a developer who produced two critical and sales flops and a canceled game, is being shuttered by Disney Interactive.

Disney scrap Armada of the Damned

It's been confirmed by Disney Interactive that Propaganda Games' upcoming action RPG 'Pirates of the Caribbean: Armada of the Damned' is no more.

More troubling is that the studio team behind it has been largely laid off, with only some transferring to their other project, Tron: Evolution.

The US release date for TRON: Evolution is December 7th while the Disney TRON: Legacy movie premieres December 17th. No EU date yet.

Also announced was a Collector's Edition which includes a model light cycle in a special case, which also houses your TRON: Evolution game. 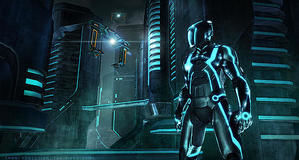