Final Fantasy Meets Pokémon Has Every Right To Be This Good.

Releasing a whole 13 months after its Sony debut, World of Final Fantasy was the perfect way to celebrate the year that saw the entire Final Fantasy franchise celebrate its 30th anniversary. Arguably released a year too soon (with the original Final Fantasy turning 30 next month), the PC version arrives at just the right time. But does it go above and beyond your typical PC port? 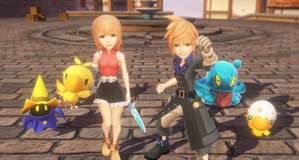