Pillars of Eternity is inching ever closer to next month’s full release date, but there are still many questions to be asked. Nerdy, quibbly questions about multi-classing, dialogue trees, and fantasy world-building. Since there’s no-one better to talk to about that than veteran RPG designer and Pillars game director Josh Sawyer, I tracked him down at a recent press event to try and get some answers.

GameWatcher: How do you kick off a big new universe like this? It must be difficult to juggle the need to inform the player without swamping them in exposition.

Josh Sawyer: I think it’s important to establish what’s important in this part of the world. The region in the game is called the Eastern Reach, and it’s a colonial area. Your character is not from here. When you start the game, your character is as new to this world as you are. We don’t try to elaborate other than in lore books and things like that, we don’t explain everything to you in a big wall of text. We just say; here’s what these people are worried about, here’s what is going on right here at this moment in time, this is what they’re trying to do. So in terms of world-building we try to give you a picture of the state of this huge colonial area, and the direction in which it’s headed. We’re not writing some huge guidebook to the universe that covers every single bit of information, we’re trying to focus on what’s happening in one corner of the world. One set of stories, and the characters that are involved in them. 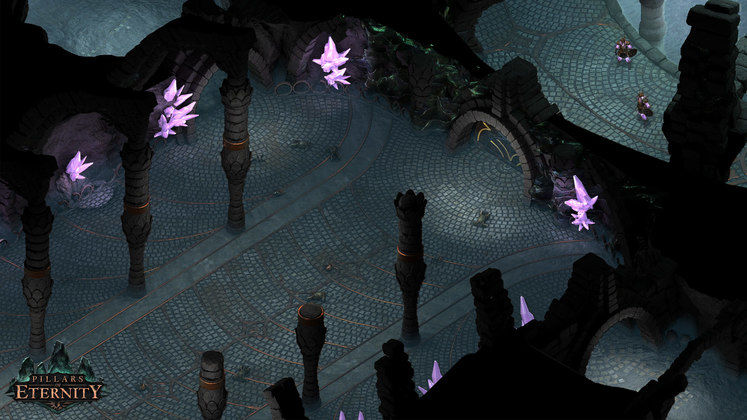 GameWatcher: In the Baldur’s Gate series we were dealing with these huge epochal events, Gods dying and rising again, all that good stuff. Are you taking a similarly high fantasy approach in Pillars, or are things a little more grounded?

Josh Sawyer: Well, we do try to keep things a little more realistic and grounded, but at the same time we know that people like it when the stakes get epically big. My kind of philosophy is to start with something small and personal, and slowly build it into something momentous. In Fallout: New Vegas for example, you start out with a fairly simple plot; someone’s shot you in the head, dropped you in a ditch, and you’re out to find the man who did it. Then, as you start to explore you find out there’s a lot of crazy shit going on in the world, and you start to become embroiled in it. In Pillars it’s a not too dissimilar situation, where you become embroiled in something that you weren’t really looking for, and as you start to deal with the fallout you get drawn into the larger story. As you start to grow in scale you realise that this is not a small conflict, it’s part of something a lot bigger. RPGs are about growth, not only of your character as they become more powerful, but of your place in the world. Gaining reputation, things like that. So even though our game is a little more grounded in focus, maybe a little more believable, I think it’s important that we have that escalation.

GameWatcher: Will we experience major choices and consequences throughout the story? You’ve talked about wanting to create a reactive narrative.

Josh Sawyer: It’s important throughout the game. We have a number of different things that reflect your choices throughout the game. We have your reputation between factions, we have immediate reactions depending on the decisions you make in completing a quest, and then we have new a mechanic called ‘Disposition’. What that is is an indicator of how you behave in the world. It’s not good/bad, it’s more like… asshole or benevolent, charismatic or blunt.

We have ten different personality types; benevolent, cruel, diplomatic, aggressive, honest, deceptive, rational, passionate… is that all of them? Pretty much. Anyway, in dialogue you might see an option that says ‘diplomatic minor’ response, you can hide these tags by the way, and as you start picking those you get not only the initial reaction from the character you’re talking to, but you also start adding points to your Disposition score. Choose a lot of aggressive, hothead things and when you walk into town people we be like, “calm down dude, we don’t want any trouble.”

That was important for us because it’s really fun to pick cool dialogue options, and if you’re playing a tabletop RPG it’s fun to mess around with those and see how people respond. In a CRPG, usually the choice feels like a throwaway; you say the sassy thing, the guy says “oh, man, you’re so sassy”, and then it never comes up again. We wanted to have a systemic layer where those choices matter. If you want to be a sassy asshole, you can play that character and NPCs will respond to it. You’re not just building a character from stats, you’re building a personality, and that makes interacting with the world much more interesting and reactive.

GameWatcher: How complicated is it to come up with a rules system that can be upgraded in the future, with new concepts and levels added?

Josh Sawyer: Umm, it’s kind of complicated (laughs). Obviously with any scaling you have to make sure to keep an eye on where it might go in the future. We tried to avoid drawing ourselves into a corner when designing the system. Throughout our backer beta we’ve tried to to listen a lot, make improvements to our classes in the way they feel, how flexible they are, to keep them all feeling powerful. It’s good when we have a playtest and at the end every player is saying “wow, you have to try this class”. Ideally everyone thinks their class is overpowered, when really they’re all just good at what they do.

So, in the future whatever feedback we get, like if the fans think a class becomes too dull after eighth, or too overpowered after seventh level, then we’ll respond to that. In the future, in sequels, anything we can do to keep making the experience better, to keep the player growing in a way that feels challenging and fun, we’ll do that. 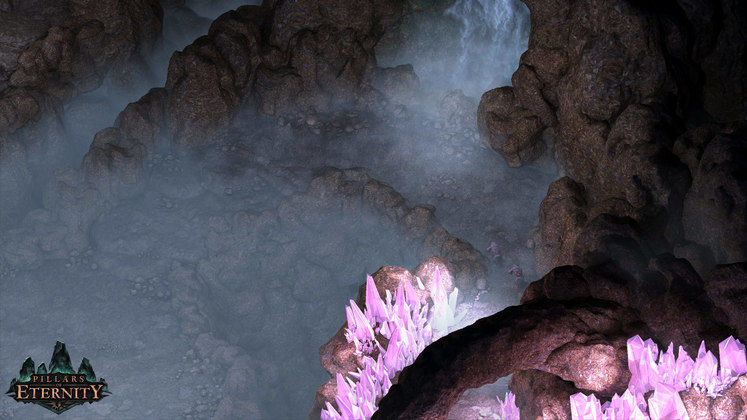 GameWatcher: You decided not add in multi-classing options for Pillars, which were a big part of previous Infinity Engine games. Was that a conscious decision to simplify things for the first game using this new rules system?

Josh Sawyer: Yeah. Well, a bit simple within the realm of having eleven classes and six races all in the game, but yes. Multi-classing is something that tabletop D&D still struggles with. Every edition has tried another way to do it, but… I understand why people want to do it, totally, it’s very cool but it’s also a very hard thing to do. For this first game we thought let’s stick with single classes, but have a tonne of options within those classes. If you want to make a speedy, offensive fighter or a tough tank fighter you can, if you want to change the focus of your character you can do that. We might do multi-classing in the future, but we had to do so much stuff for this game that at a certain point we had to say, OK, we’ve promised eleven classes in the Kickstarter, let’s just stick to those.

GameWatcher: How friendly will Pillars of Eternity be for modders? Are you supportive of community created content?

Josh Sawyer: It’s awesome. It’s kind of hard because we’re using Unity as our engine, which means there are certain things we can’t give the modders access to, but we know there are already backer beta players on our forums making mods. They’re making UI mods, graphical mods, they clearly hate the things I’ve designed… Which is great, you know, if they want to change balance or flip around the UI screen, why would we have any problem with that? As long as we can support it, which is not always easy on a Kickstarter budget and a middleware engine, we will. It was great on Fallout: New Vegas to see what everyone came up with, and I’m hopeful that not only will people make some great mods for Pillars, we’ll also be able to open up the game more for modding down the line. It is a singleplayer game after all – whatever experience people want to have, that’s fine by me.

GameWatcher: In terms of additional content for the game, will you be heading down the DLC pack route, which is something Paradox as a publisher is known for, or will you be concentrating on larger expansions?

Josh Sawyer: No, we want to do a traditional expansion, and we’re in the early stages of planning for that right now. Part of the Kickstarter campaign was a full expansion, so we’re definitely doing a Tales of the Sword Coast style campaign. We’re still in the early stages of design for that right now, though. What I would say about additional content other than that, is that I would like to see any gameplay tweaks and changes we make in an expansion get rolled into a free patch. So if you don’t want to buy an expansion, you get all the same gameplay benefits without the extra story. 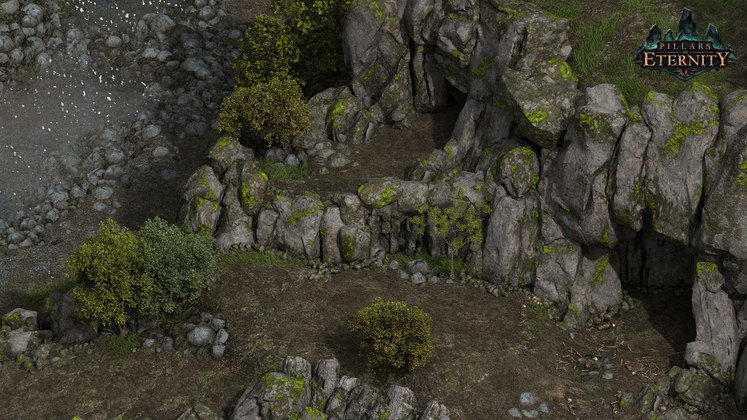 GameWatcher: Obviously I’m trying to stay well out of the spoiler minefield here, but does Pillars have a distinct, one-off story? The original Baldur’s Gate sort of set itself up directly for a sequel at the end – does this feel like a complete story in and of itself?

Josh Sawyer: Yes, I think it does. Obviously if we want to make a sequel we’ll follow up on things, but this is a complete story with a distinct ending. There’s no big twist that gets unresolved, and there’s a real sense of closure at the end. There’s lots of stuff to build on, obviously, but the main conflict is resolved at the end of the game.

Many thanks to Josh for speaking to us. Pillars of Eternity is set for release on March 26. Some sort of temporary stasis or advanced cryo-sleep might be in order for fellow isometric RPG fans.