Obsidian's gargantuan, crowd-funded RPG epic is here. You might want to quit your day job

I can barely stand. I’ve got vitamin deficiencies, my eyes are bleary and unfocused. I think I might have deep-vein thrombosis, and I definitely have carpal tunnel syndrome. I’ve just finished the colossal, monstrously huge Pillars of Eternity in time to write this review. And once I’ve finished doing that, I think I might just start the whole damn thing over again. Rest assured, Kickstarter backers and CRPG fans, Pillars of Eternity is just as great as you hoped it would be. Just be thankful you don’t have a deadline to finish it in.

Obsidian's gargantuan, crowd-funded RPG epic is here. You might want to quit your day job.

You are a stranger newly arrived in the country of Dyrwood, a huge landmass dotted with colonial settlements and ancient ruins. The war between foreign settlers and the native Glanfathans (a Celtic influenced spin on Native American tribes) has technically ended, but understandably the locals are still far from happy at intrusions on their holy sites. There’s so much going on in the world that attempting to sum up the backstory would take me about six pages, but suffice to say that along with the ongoing colonial tension there’s the fallout from a religious war that’s very nearly torn the fledgling Dyrwoodan nation in two. Then something happens to you, something which inextricably links you to the fortunes of the entire country, maybe even the world. This is an RPG after all.

Given free reign to design their own universe, the team at Obsidian have created a stunningly well-realised fantasy world, one which maintains a lot of the core elements fantasy fans will be familiar with, but gives them some really interesting twists. I love the switch over to a late middles ages setting, allowing for the introduction of firearms and Renaissance-era armour. The game’s theology is dark and complex, with a pantheon of gods far less binary in disposition than the good versus evil deities of traditional D&D. Without wishing to spoil the story, which touches on this pretty heavily, themes of reincarnation, death, rebirth, and the nature of a being’s soul are prominent. The writing is uniformly excellent, complex and full of ideas, and crucially it treats the player with respect; tonally it feels a lot closer to the metaphysical and spiritual musing of Planescape: Torment than the high fantasy of Baldur’s Gate. 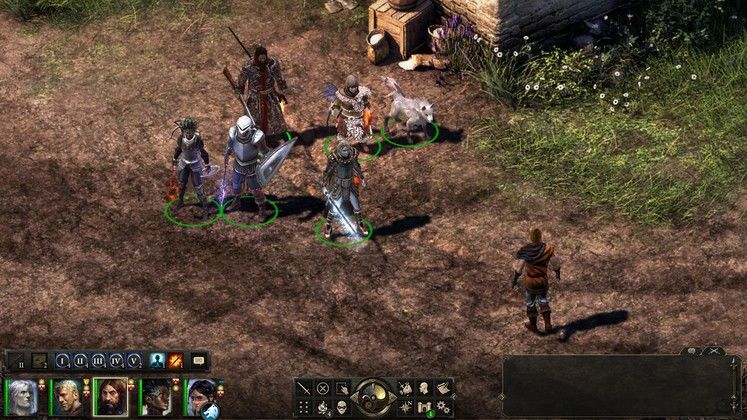 Here's my brave troupe of adventurers, fresh back from kicking a dragon in the fruits

The plot itself takes a little while to get going, but once the rousing second act climax plays out it builds up to a fascinating, absorbing conclusion. There’s an excellent villain (though he’s not the cackling, moustache-twirling sort, has his own motivations and is all the more effective for it), plenty of neat twists in the tale, and lots of opportunities for the player to impact proceedings. I barely had the time for one playthrough for this review, but I’m itching to start over with a new character and make some different choices to see how the story shifts.

A quick word on the art style; this game is one of the most beautiful things I’ve ever played. Those ultra-crisp painted backgrounds are so sharp and detailed you could almost sink into them, each map sketched with painstaking detail and care. Waterfalls roar past ancient, moss-covered ruins, sun twinkling on the rushing river below. Deer skitter away as your party heads deeper into the woods, bursting into a clearing where a group of Glanfathan hunters wait with axes and bows drawn. I’m gushing, I know, but for all the high-tech wizardry of modern RPG engines, there’s something magical about the painterly style of Pillars. Each new map you encounter is another treat to be savoured as you slowly strip away the fog of war. The visual design, down to the weapon and armour models, is cohesive and beautiful. I want to explore more of this world. I’m aching to do so.

Character creation is robust enough that I spent hours choosing my character’s race and finer background details. Classes range from your familiar fighters and barbarians (good at hitting stuff in the face with bits of metal), to wizards and priests (spell-flingers), and more esoteric classes like ciphers and chanters. The latter possess some of the most interesting mechanics in the game. They can create songs out of various magical phrases, generating buffs and beneficial effects as they sing. Build up enough of these phrases and you can release a powerful spell, summoning skeletons or blasting enemies with thunder. You can even name your favourite tracks, marching around the fantasy landscape summoning up storms with your voice like a kind of medieval Tom Jones. It’s great. 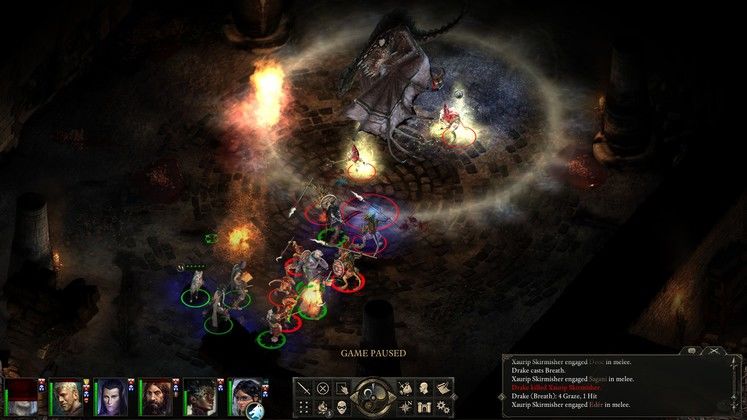 This battle is really dragon on, isn't it guys? ...guys? 'sound of axe impacting on skull'

Mechanics like this showcase Obsidian’s more creative system designs, but in truth each class has a bunch of really cool abilities that makes them feel powerful in their own right. Fighters, the vanilla choice for most newcomers to this kind of game, are no longer the sword-swinging training dummies they were in the Baldur’s Gate series, and instead pack a handful of abilities that allow them to lock down enemies, knock them prone, or charge into the fray to get up close and personal with an enemy as quickly as possible.

That’s not the only thing that’s been improved from the games that inspired Pillars of Eternity. Obsidian haven’t merely recreated systems, they’ve gone in under the hood to improve everything that was frustrating about the isometric CRPG, and enhance everything that already worked well. A fast travel speed has been added to make crossing huge areas you’ve already explored less tedious. Alternatively, a half-speed option gives you more time to think in combat. Loot is blessedly free of fiddly inventory management, with anything that isn’t a direct-use item or a wearable bit of gear going straight to your bottomless ‘Stash’, which can be accessed at any time while out in the field. These are all smart changes, and they make adventuring remarkably smooth and hassle-free.

Combat benefits greatly from a rules system designed specifically for a video game. Rather than a clunky pen and paper adaptation, Pillars’ system introduces more manageable concepts like per encounter abilities, real-timed duration effects, and a far more intuitive set of core statistics that won’t gut your character if you make a non-traditional choice (Obsidian likes to use the example of bumping up the Might stat for a brawny, powerful wizard, rather than sinking points in the more traditional Intellect stat). It definitely takes a little getting used to – there’s some reworked terminology that even those used to the familiar D&D setup will have to wrap their heads around – but once it clicks it really works. Knowing exactly how long your buffs or penalties will last to the second, rather than in vague and abstract ‘turns’, makes a huge difference. The interface is neat and concise, laying out your tactical options in a clear and easily accessible way.

In terms of the basic swing-by-swing feel, combat is hugely satisfying. Melee strikes feel weighty and impactful, while Obsidian has done a great job coming up with some pyrotechnic spell effects. The best battles have you anxiously staring at the screen, considering your options as your heavy-hitters get taken out of the equation. Fireball spell over there? Try to knock the big guy down? Maybe activate the withdrawal ability on your Rogue to try and flank that vulnerable wizard at the back. There’s so many options at your disposal, so many individually cool and clever ways to clear an encounter. 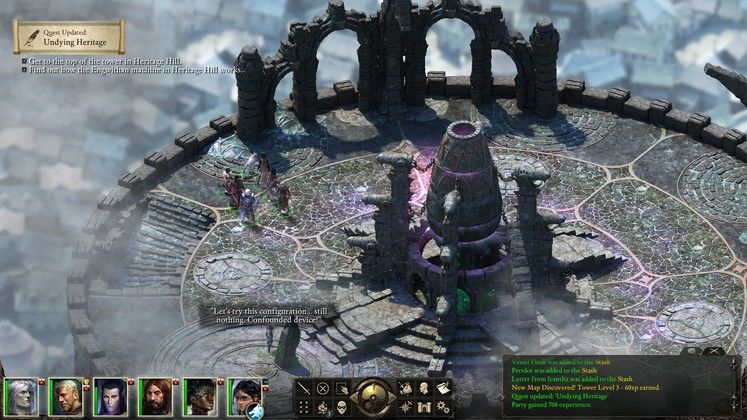 It might not be covered in bloom effects, high-def textures and HDR, but Pillars' visuals are utterly sumptuous

Here’s something I really love, and which I think demonstrates the care and attention Obsidian has put into the game. When switching to hard mode, rather than just cramming percentage increases and buffs onto the enemies, Obsidian has reworked each encounter in the game for a more challenging setup. Rather than three Skuldr rat-people, you might encounter four accompanied by a couple of pet spiders. That’s a lovely conceit, one which really has me tempted to try a hard mode run on my next run through.

I could write another thousand words on Pillars of Eternity, and be no closer to feeling like I’ve done this ridiculously huge game justice. I could talk about the clever resting system, which forces you to be very careful about where and when you choose to refresh your party’s spells. I could discuss the beautiful descriptive writing, which effortlessly paints a vibrant picture of each of your companions without the need for lengthy animated cutscenes. The companions! Mad monk Durance, likeable, easy-going Eder, hard as nails hunter Sagani. Aloth the wizard, whose particular ailment provides some much-needed comic relief, but who has hidden depths that become clear as your story goes on. I could mention the Stronghold system… which feels a bit superfluous, actually. Or the surprising lack of bugs, which is something I never thought I’d say about an Obsidian game.

All you really need to know though, is this; Pillars of Eternity is a triumph. If you’re a backer and a fan of those classic Infinity Engine games, you’re in for a real treat, a smart and complex adventure that will keep you entertained and absorbed for possibly the rest of your life, and certainly until the already announced expansion pack comes out. Even those who never got on with those classic games should give it a go, because there’s a tonne of smart design choices in here that smooth out the rough edges that might have kept you away before. A superb introduction to a fascinating new fantasy world. Can’t wait to see where in the world of Eora we get to go next.

The culmination of the second act is a big moment that really kicks the story on, and reminds you of your huge importance within the game’s world. Serious s*** goes down.