Me and writer Chet Faliszek put our differences behind us, for science

24 January 2011 | By Import
It's still a few months away, but the buzz is already growing about Valve's up-coming puzzle action-adventure, Portal 2. At the EA January Showcase, we sat down with writer Chet Faliszek and asked him a few questions about the game.

Strategy Informer: So, the original Portal game is widely known to have been little more than a tech-demo, or an experiment to see how the public would re-act. Now that you're doing a more full-bodied product with Portal 2, is it what you imagined it would have been had you done a full title with Portal?

Chet Faliszek: Definitely a lot of the elements... a good example would be in the original Portal, in our heads, the test chambers would always be reconfiguring themselves, but we couldn't pull that off in the game. But now as you can see in the videos the walls are slamming together and all that, and we can now do that. So a lot of those kind of elements are things we had thought we could expand on. Equally though we had to do more than just that, right, we had a very unique thing and we had to make sure we expanded out, yet kept that flavour of what portal is.

Strategy Informer: Can you just confirm what modes the game will have at this point?

Strategy Informer: What can you tell us about the core story at this point?

Chet Faliszek: You'll get to see the whole Aperture Science world in a different way, and have an experience with that. The end of Portal shows you getting pulled back into the facility, and you'll go from there. But we can't really talk about it. Can't ruin the surprise..es... multiple surprises, not just one. We're not hinging everything on one twist.

Strategy Informer: With Co-op, what were the challenges you faced in not only creating a meaningful experience, but one that ultimately worked with the technology involved?

Chet Faliszek: The first thing we looked at was, players like to work with each other who can communicate in-game well. And that's not just head-sets, because you could say "Put a portal over there", "Where's there?". So we have the ping tool, picture-in-picture so you can see what they're seeing. So giving people the tools to communicate well, but also not making it too difficult. That's not to say we cut back on the complexity, but we train you on that.

So especially in co-op you'll see people stumble on things like bridges, because they can't get around it in their head, and just things that people can have a hard time getting to grip with. But the other person will and will be able to help them along. Or maybe they won't. Or maybe both parties will say there's a different way to solve a puzzle. And the thing is there are multiple ways to solve the puzzles.

Strategy Informer: Before it was officially announced, early chatter regarding Portal 2 revolved around competitive multiplayer, and it was said that it wasn't as fun as you would think. Is that still the case?

Chet Faliszek: Oh yeah. We realised that - the first 5 minutes are fun, second five minutes you're just kidding yourself that it's still fun, and then the next five minutes you're like "when can we stop?". It's just that we haven't figured out how to do it yet though, there is still something in there for further down the road. For now though, we just couldn't find a way to make that fun for an extended period of time, whereas co-op was instantly fun, rewarding... people leave that experience and go high-five each other.

Strategy Informer: You could almost say the original Portal was like 'Portal Zero', and Portal 2 is the true 'first' Portal game. Is this a franchise you see yourselves continuing as long as it's viable?

Chet Faliszek: You know, we don't really look at things like that. We just concentrate on the game we're making and making sure it does everything we want it to. After release they'll be a time of self-reflection and then we'll decide. But it's not like we're holding anything back because "Oh, in Portal 3 we're going to put all this stuff in". We try to make everything happen in the one we're working on.

Strategy Informer: Do you worry that Portal 2 won't have the same 'magic' has the first game?

Chet Faliszek: That's... insanely hard to judge. We have play testers who are really enjoying the game, they're having fun. We know we have this really great experience with great moments, and all this great stuff in it. But Portal had this magical quality to it... and our testers tell us Portal 2 has it as well. But it's like people asking me how many new Meme's will be created from this - you can't create memes, they just have to come naturally. All you can do is create the best game that you can, and then release it to the world and see.

There you have it, some insights straight from the source. Check out our hands-on preview for more impressions of Portal 2. 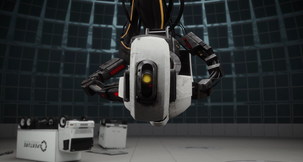