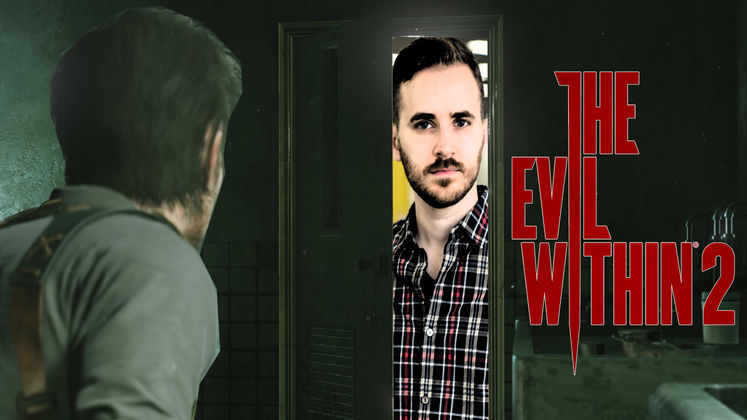 It’s Friday the 13th tomorrow and we’ve got a brand new horror game coming: The Evil Within 2, the next game from Resident Evil creator Shinji Mikami’s company Tango Gameworks. We’ve already checked out the game and it’s already pretty damn cool, and now just before the game’s release we’ve had a chance to talk with the game’s director John Johanas, who directed the excellent DLC missions for the first game and who’s taken the lead for The Evil Within 2, as Shinji Mikami takes a supervisory role.

We’ve played The Evil Within 2! Here are our impressions! Our review of The Evil Within! It’s been three years since The Evil Within, and Sebastian Castellanos is coming to terms with what it all meant, and he’s told that his daughter Lily, who he thought dead, is actually in the clutches of the organization that caused all the problems in the first game. He goes back into the mental STEM world to find her, but it also coming to terms with the nightmares he faced before. But he’s not the only one searching for her. As John describes it, “the more nefarious characters see her as a tool to do even more extreme things within this world.”

The first thing we talked about was changes to the first game. For example. if you can’t remember much about Sebastian from the first game, you’re not alone. He was the main character but didn’t have much to do with the story really. That’s something Tango Gameworks wants to change, according to John. “Right after we finished the DLCs of the first game we jumped into this we the idea of focusing the sequel around Sebastian. The first game wasn’t really about him, he was more of a passive observer, and we wanted to craft a compelling story around him.” 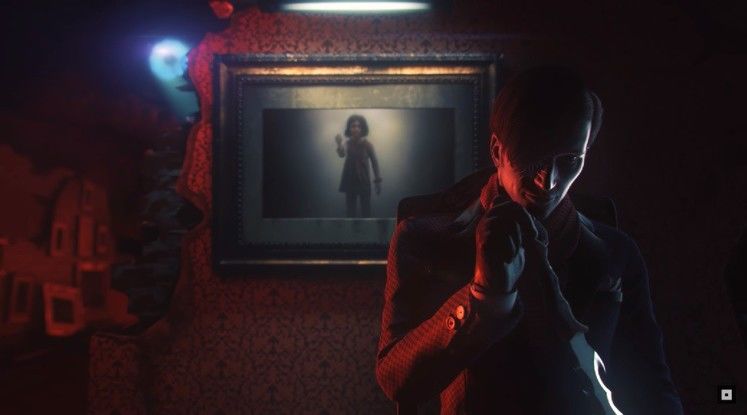 Of course the story itself was also a little bit confusing too. “The biggest feedback we got from the first game was about the story, and how people had issues following it. It was based around a mind so was meant to be confusing, but what you were doing as you went along wasn’t clearly contextualized. So we wanted to change that by making the plot easier to grasp, without dumbing it down.”

Something else Tango is addressing are more accurate difficulty levels. The first game was really tough, and while plenty of gamers are used to that, others had a hard time. “Many loved the challenge in the first game, but a lot of people couldn’t beat it! This time we balanced the difficulty modes so people who aren’t into tougher games can get through and see the end, but also have a mode for people who like that level of challenge.” A difficulty balance is certainly important. This isn’t Dark Souls, after all. 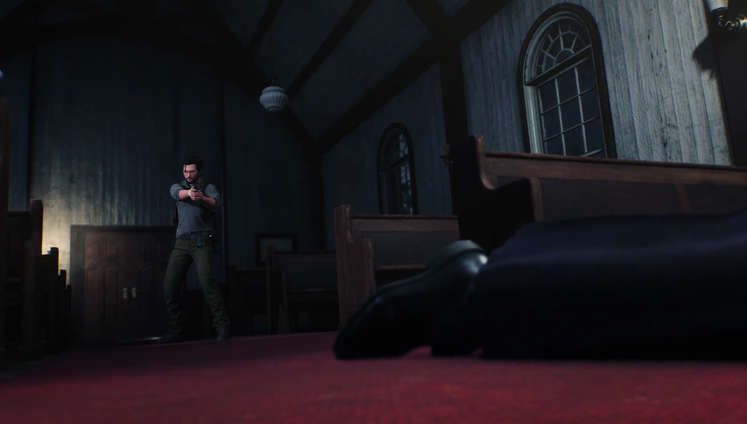 At least one change in particular we’re sure fans of the first game will be delighted to hear. “We’ve got rid of the black cinemascope bar!” Hooray! “We also focused on creating a cleaner image, as when you put a grainy film image on a 4K TV it doesn’t look good.” Absolutely true. The border and grainy image seemed a neat idea, but in practice we just turned it off or modded it out the second we could.

Of course the biggest and most interesting change in The Evil Within 2 is the introduction of Union Town, creating a more open-ended sort of gameplay as Sebastian explores it. John explained that, “the world is created as this American town. It’s falling apart because the world is collapsing. Sebastian is exploring it piece by piece trying to find his daughter, but in between he visits these off-shoots created by the minds of the antagonists. While you’re not going back to the exact same location, Union Town is a reappearing setting you’ll be visiting different sections of as you proceed.” 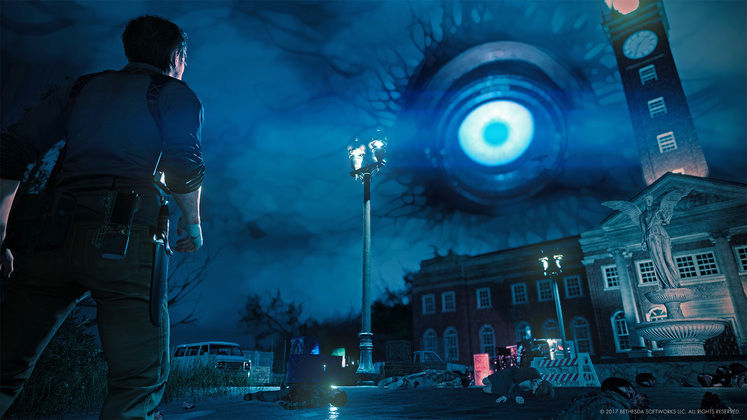 So while you don’t explore the entire town as an open world, Evil Within 2 has certainly got many large open areas you can explore at will. What made them want to make the game more open? “We had large areas in the first game with different routes and paths, and we wanted to expand on that idea. We debated how big they should be and settled on these nicely-sized chunks you can play. They don’t destroy the pace of the game, and you’re also not confined to them – you can skip them if you want to.”

That certainly sounds a little daunting, keeping to The Evil Within’s linear gameplay style and pushing it into a more open setting. I asked John what challenges that created. “Our first thought was to put in non-stop events and things to do, but we realized the point of these areas was to have a little downtime. Originally they were covered with enemies, and it took a while to figure out a nice balance between having enough things to do to make it worthwhile and not just feel like you’re stopping every few seconds. It was tough, but it was fun to play around and mix these ideas into a way that plays good.” 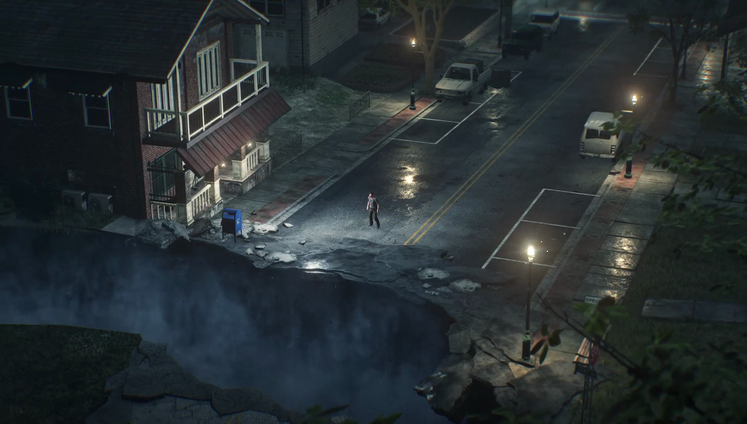 By now, especially if you’ve read our preview, you’re probably thinking of one game: Silent Hill, another horror title set within a single town broken up into sections that you can freely explore, before going to a more linear area, then to a different part of the town. I asked John if Silent Hill was an influence, and he confirmed it. “They had a flow we looked at, like the way you feel you’re in a town exploring it even if you don’t see the full thing. The way they’re connected up is similar, like the way it goes between exploration and linear areas. That is certainly a comparison that can be made, yes!”

So with the more open areas filled with secondary objectives and things to find, Evil Within 2 must be far longer than the last game right? That’s not really the case, according to John. “With the more open elements you can really extend the playtime and if you don’t explore at all it might be a little shorter, but from our perspective on average it’s pretty much on par with the original game.” Interesting. The first game took us around 14-19 hours and that’s certainly a good length for a survival horror, so we’re certainly not complaining if the sequel is around the same. 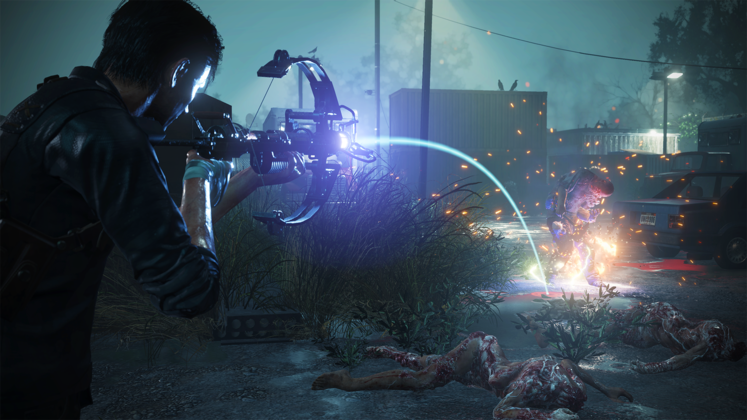 Of course with Resident Evil creator Shinji Mikami involved, Evil Within 2 has to have action in with the horror. We saw a lot of stealth in our preview, but is it possible to treat it like a pure action game? “You have limited ammo so you can’t run ‘n’ gun the whole game, but stealth is just an option – one you can use the whole game if you want, but it’s not required. You may have to run from some enemies though as there’s not enough ammo to kill every single enemy in the game.”

Of course the introduction of stealth was something that was played with in the DLC chapters The Assignment and The Consequence, which were more straight horror than the main game and didn’t even give you a gun for the most part. John directed those, so I asked if he was intentionally bringing in ideas from the DLC. “That pure horror feel in the DLC works in a shorter experience, but it’s not a style that can last 15+ hours. We wanted to keep the sequel in line with the first game, but we took what we learned regarding stealth mechanics and those horror situations from the DLC and worked them into the game, so people who wanted to play like that in Evil Within 2 can approach it in that manner.” So you can basically choose between action or stealth? “We want to make that freedom to choose between stealth or shooting more present than it was in the first game.” 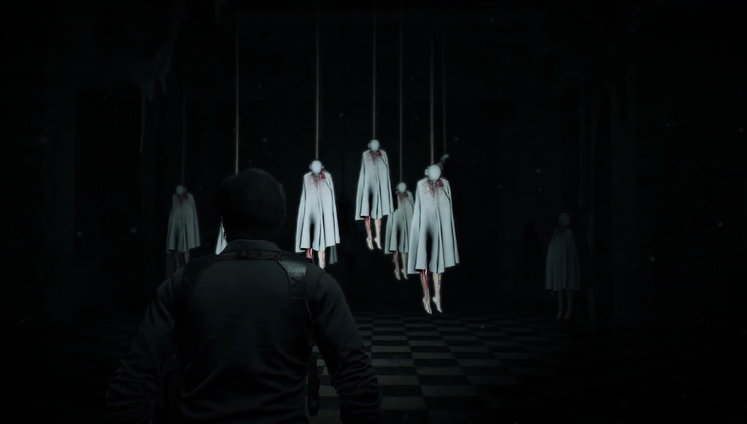 Of course there’s certainly deep, scary horror moments, like the long-haired ghost lady that made me jump out of my seat at the end of the demo below. I asked John if she would be a recurring problem throughout the game. He didn’t want to spoil it, but he did admit, “that’s not the only moment where you’ll run into that enemy!” Great. I’ll need to stock up on fresh underwear.

I did wonder though, with the Resident Evil series following the likes of Outlast, Layers of Fear, Amnesia and what would’ve been Silent Hills in P.T. into first-person, did Tango Gameworks or Bethesda ever consider doing the same thing with Evil Within 2? Apparently not. “It never really came up. We wanted the perspective the same as the first game. There are some sequences where we experiment with that, but its third-person all the way. First-person can be a compelling way to view horror, but we like third-person and wanted to keep it!” 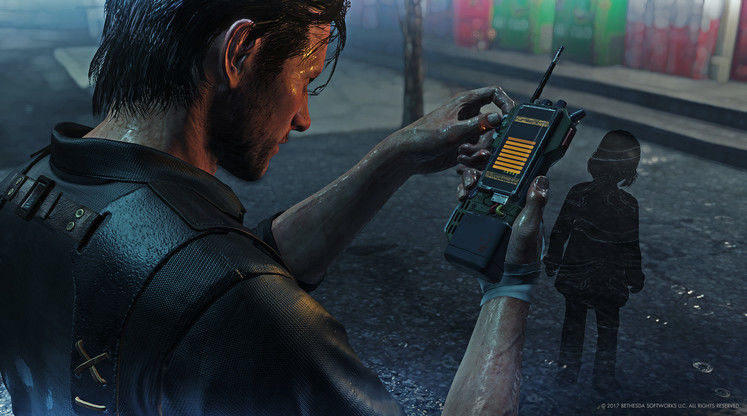 So with John’s promotion to Game Director, just how much was Shinji Mikami actually involved? “He’s right there with the team every step of the way. He gives us freedom with how we want to construct things, but he’s watching over every detail to make sure it’s not going in some direction where it’s not going to work. Whenever there’s an issue he’s there to talk with us and find a solution. And every now and again he’ll jump in and say ‘put this enemy here’! But he’s always there, part of the team.” And does John personally get along with Mikami-san? “We’ve been working together seven years, and obviously we’ll argue about some things, but he’s open to creative solutions with the game so you get into fun conversations with him over ideas.”

With the interview drawing to a close and the game out just tomorrow, I asked John if he was nervous about release? “Who wouldn’t be! You spend so much time with something like this, you’re confident about putting it out and you want people to enjoy it. We’re looking forward to the fans’ opinions the most. ‘Anxious’ is probably a better word!”

Before we said our goodbyes, I asked if there was anything else he wanted to tell people about the game? “Yeah, buy it!” Of course. “We want to see people’s reactions and we really hope everyone enjoys it, we put a lot of love into it!” Thanks a lot to John Johanas for talking to us and to Bethesda for arranging this chat! The Evil Within 2 is out tomorrow, Friday the 13th of October, and you can bet you’ll be seeing us playing it.

Trending The Evil Within 2 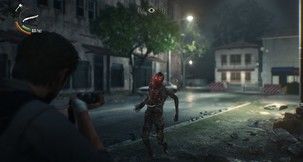 Evil Within 2 Game Director Explains Why The... 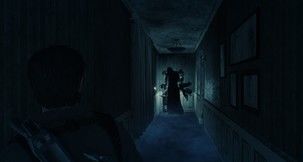 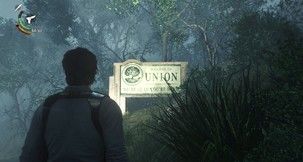 The Evil Within 2's Denuvo DRM was cracked in a...