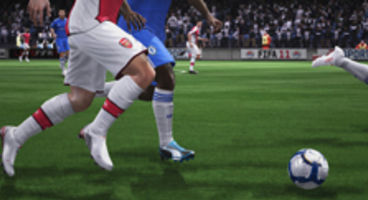 That's according to their press release for the newly announced FIFA 11 anyways. Also added is the new Pro Passing, “where pass accuracy is determined by a gamer’s ability on the control pad, and player skill, situation and urgency on the pitch, yielding a deeply rewarding passing system.” I sense a lot of rage at the controller pad in the future.

FIFA 11 releases on Xbox 360, PS3, PS2, PSP, DS, Wii and PC this fall. Check out the full press release from EA Sports below - it's full of corporate goodness.

GUILDFORD, UK. – 9th June, 2010 – Electronic Arts Inc. (NASDAQ: ERTS) today revealed that its top-selling* franchise from EA SPORTS™ will redefine player authenticity when FIFA 11 launches this Fall on the PlayStation®3 computer entertainment system and Xbox 360® videogame and entertainment system. FIFA 11 reinvents player authenticity – on and off the ball – for every player and at every position on the pitch with Personality+, an all-new feature that sees individual abilities reflected in game, enabling clear differentiation for every player.

“Personality+ is the evolution of individual distinctiveness that sees a footballer’s abilities on the pitch mirrored authentically in our game, creating individual personalities in FIFA 11,” said Executive Producer Kaz Makita. “We have reached a level of sophistication within our game engine where footballers in our game will behave and perform as true individuals.”

Personality+ distinguishes individual footballers from one another by utilizing a database that evaluates and grades each player’s skill-set over 36 attributes and 57 traits. The EA SPORTS FIFA franchise utilizes a network of 1700 scouts, editors and reviewers positioned around the world to evaluate each player, creating one of the world’s most comprehensive databases to drive its market-leading football engine. Personality+ plus will be integrated everywhere in-game. Elite players are now empowered to showcase their world class skills. Real Madrid’s Kaka will deliver crisp, creative passes, Barcelona’s Andres Iniesta will utilize tighter turns and close control to dribble through defenses, Manchester United’s Wayne Rooney will hold off defenders and strike shots from distance with pace, and top-flight defenders like Giorgio Chiellini of Juventus will anticipate, predict and react to offensive players to win back possession. New body types and player models will further distinguish each player on the pitch. In addition, goalkeepers have also been injected with Personality+. The real-life personality of the keeper, whether acrobatic or traditional, will dictate his style in game. Dive attributes will determine the keepers with the ability to reach for further shots while reflex attributes determine reaction times, so a keeper like Petr Cech of Chelsea FC will be able to showcase world-class skills.

FIFA 11 introduces new Pro Passing where pass accuracy is determined by a gamer’s ability on the control pad, and player skill, situation and urgency on the pitch, yielding a deeply rewarding passing system. Poor decisions or over/under striking the ball will mean error-prone outcomes. New types of passes such as swerve passes will enable players to make a safer and more effective play.

Building on FIFA 10 gameplay, which won 50 sports game of the year awards, FIFA 11 continues to listen to its growing legion of FIFA fans around the world to refine gameplay in ways that matter most to fans. Visit http://www.facebook.com/easportsfifa to join the FIFA group to express feedback directly to game developers and receive exclusive content. New game modes and innovations will be revealed in the coming months along with features on other platforms. Visit WWW.FIFA.EASPORTS.COM for more information. Screenshots are available at www.easports.co.uk/press.

FIFA 11 will be available in stores world-wide this Fall for the PlayStation®3, Xbox 360®, Wii™, PC, PlayStation®2 computer entertainment system, Nintendo DS™, PSP® (PlayStation®Portable) system and mobile. It is developed under the EA SPORTS brand by EA Canada in Burnaby, B.C. The game has not yet been rated. 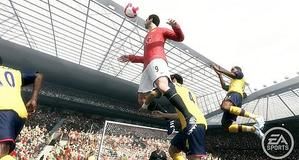