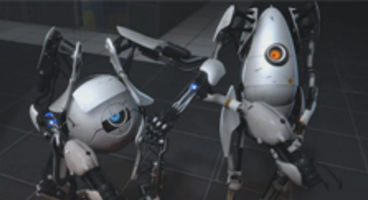 Publisher EA want Portal 2 signed with them and they're hoping to convince developer Valve they're right for the job. They're "very optimistic" about it.

EA Partners note the studio "demand excellence" from their dealings with others, and you have to "earn their business" each time. Portal 2 on track.

In the past EA has published Half Life 2: GOTY and Counter-Strike for PC and brought Half Life 2 to Xbox. They did also handle the original Portal as part of The Orange Box. Currently Valve has Portal 2 pegged down for February 9th, 2011.

"We're still talking about it," said EA Partners boss David DeMartini. "The interesting thing with Valve is they always make great games. They ship them exactly when they're going to ship them. They're a really high quality partner, and they demand excellence from anybody they have a relationship with. You earn their business every single time."

"It's well polished, on schedule for the 9th February release. Everything is absolutely on track for them." Valve announced the release date for the anticipated sequel last week at Cologne, Germany's gamescom.

"I don't have anything signed in blood yet. I'm certainly working on it. They're a great partner and just a great studio. Clearly one of the best in the world. They just know what they're doing. They know what consumers want," added DeMartini.

What do you think? Has EA got the right stuff to publish Portal 2, videogamer?