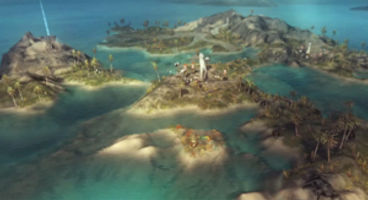 They had to "fight to make this kind of game alive." Eric Chahi didn't expect it go down so well with critics, hoping only for a "good reception, but you never know." The game's editor became the game itself.

"There is always something we would like to do, but we didn't have the time or was too complicated to make alive," admits Chahi, when asked if he's completely satisfied with From Dust. One ambitious feature they tried to get in was getting the people to age so it mirrored the erosion of the game world - it proved too difficult.

"We have it on the landscape and regarding the story, with the recovery of memories and knowledge. But at the beginning of development we wanted to have this on the people so you can see a child growing, becoming an adult, becoming old and going to dust. The passage of time would be viewable on every level of the game."

"But that was too complicated in terms of gameplay and game mechanics, so we preferred to leave it. It was complicated also to have a correct animation, to have them morph from a kid to an adult," he explained.

"One side we could have developed was the animal side, and have more wildlife. But aside from this, we crafted a game so it was working well. I'm very happy with the result, especially regarding all the simulation. I love when the game rules merge with the meaning of something and with the gameplay."

He couldn't reveal any hard sale figures for From Dust because "Ubisoft don't want me to. But it sold very well. That's good because we can push them to create more original things." It released on Xbox 360, PS3 and PC. Chahi is certainly hopeful that From Dust may have given the boot to the games industry for more god games.

"It would be cool if more games like this came out. I would love to see other games with this kind of simulation. Maybe Peter Molyneux will create a new game. He played From Dust. He went to Montpelier one year ago. We showed him From Dust. It was not final but he loved it. I think, maybe it stimulated him. I don't know," he said.

What did Molyneux think of it? "He gave us a true compliment. He said it is the first god game he's played."

"I was really surprised. I was thinking, maybe he's over-complimenting. But well, I understand why he said that - because of the plasticity of the terrain, and he worked on Populous, where you can interact with your terrain. In Black and White there were some volcanoes, but it was for a limited time and a limited area," continued Chahi.

"He was very kind. As a fan of Populous and his work, I was very touched."

"From Dust was hard work. You have to fight to make this kind of game alive. The team did fantastic work. There was a lot of perseverance. Before it existed some people didn't believe. Some people believed." Check out the full interview between Eric Chahi and Eurogamer. Have you played and enjoyed From Dust? Want more god game sims?