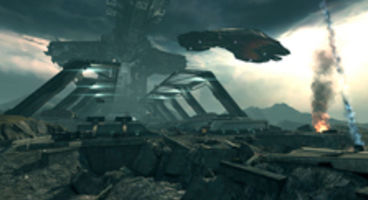 EVE Online developer CCP says their DUST 514 MMO spin-off is heading for PlayStation 3 because of "Sony's willingness" to work with them on the MMO.

This latest project was "inconceivable not too long ago," as DUST 514 is an MMO that "feeds into another" on a different platform, which is EVE Online on PC.

"We’re breaking so much ground with DUST 514: we’re not only building a full console MMO; we’re building one that feeds into another MMO on a completely different platform," said executive producer Brandon Laurino in an interview on the EU PlayStation.Blog.

"We’re breaking more ground by bringing the microtransaction business model to a console shooter for the first time. All of this was inconceivable not too long ago, and it’s the partnership between CCP and Sony that’s finally making it happen."

DUST 514 connects with EVE Online to compliment its feature set and the player managed corporations (guilds) that dominate the space faring MMO. Players of DUST 514 act as the mercenary forces that will be bank rolled by EVE Online users.

"It runs both ways – you can be sure that we’re very conscious of that in our design, we run through all the different use cases constantly to ensure its well rounded. EVE Online players can continue playing just the way they are and new players can jump into DUST 514 and get a traditional shooter experience, if that’s what they like," said Laurino.

"There are aspects that are consistent between the two platforms, such as in-game currency, and there are ways that EVE Online players can impact events in DUST 514 and vice versa, all without harming the overall ecosystem."

EVE Online occupies a single shared universe and DUST 514 will be doing the same and not spread across a bunch of split instances. "...people playing DUST 514 and people playing EVE Online are essentially providing user generated content for each other, just by their sheer presence and their actions in the game world," he explained.

CCP has huge hopes for DUST 514 in not only providing an immense boost to EVE Online but also reshaping the playing field for MMOs and console shooters.

"I hope it comes through that what we’re developing is a truly new experience on PS3 – on consoles in general. It is the deepest shooter with the richest universe ever conceived and, on top of that, by bringing to market an MMO with microtransactions, we could be changing the face of console gaming forever," said Laurino.

"This is groundbreaking stuff, but user choice is at the core – it’s playing the game however you want to play it. If you want a quick experience, you have it; if you’re looking for something deeper, it’s there. If you want to pay a very small amount of money to play, you can; if you want to be heavily invested, you can do that too. We’re providing a more extensive array of options than has ever been seen in a console game."

No date has been stamped for the DUST 514 beta yet, but CCP won't just be switching it on as that doesn't fit in with their narrative; it won't be called a 'beta' but 'Private Trials'.

"It’s going to be a bit weird if, all of a sudden, we release the DUST 514 beta and all these mercenaries suddenly show up in the EVE universe, so the setting is that the first small group of players that get access to the Private Trials will be the first trial of this new mercenary technology in the context of EVE Online," Laurino explained.

"Just as you’re helping to test the game in the real world, in the EVE world you’re taking part in war games organised to test this new mercenary technology." Are you looking forward to CCP's DUST 514 as a console shooter fan, or as an EVE Online capsuleer?