16 June 2011 | By Marco Fiori
We've all been there haven’t we? Long hours at the hands of unappreciative bosses, jibes from demanding co-workers, delays on the daily commute – it’s enough irritation to make even the best of us crack. One minute you’re happily answering emails, the next you’ve snapped, thrown a stapler at your manager's forehead and walked out the door with your novelty USB toy.

Back before the days of the ever omniscient web gods, the above was how it used to be. Nowadays work related tantrums take place in the online space where an army of people hang on your every word. Venting online has been around for some time, but it used to be hidden on forums deep in the bowels of the internet.

Social networking has changed this - the invention of crowdsourced troubleshooting for life issues has led many to forget that others, aside from your direct audience, are listening. And if they’re not, you can be sure someone who can alert them to your misgivings is. All it takes is one mistake, one lapse in judgement and you’re snowed under with angry emails, tweets and articles.

Suffering in silence until you murder your office isn't necessary anymore. All you have to do is jump on Twitter, rage in 140 characters and go to sleep with a clear conscious, right? 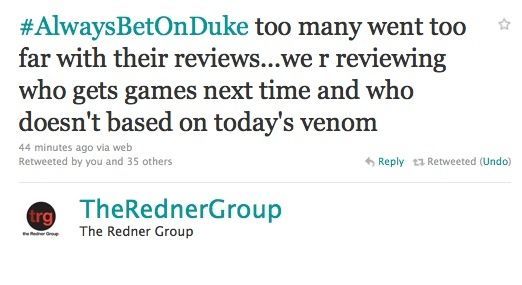 That's what US PR agency the Redner Group did last night. Fed up with the negativity surrounding its long delayed client’s game, Duke Nukem Forever, Mr Redner himself accessed his Twitter account and threatened:

"Too many went too far with their reviews...we are reviewing who gets games next time and who doesn't based on today's venom”

If that wasn't enough, he followed up the proclamation with “Bad scores are fine. Venom filled reviews...that's completely different.” While he has a point about needlessly viscous reviews, the general response was well founded. Duke Nukem Forever (DNF) isn’t a good game and Metacritic backs up that claim. Its current average score across the gaming press is a dire 50. In an industry where 70 is the average, this is akin to a big pile of faeces.

PR blacklisting for negative reviews has long been murmured in the gaming industry and while examples do exist, no-one has outright threatened journalists with blockades. It’s usually done on internal emails and behind closed doors. Occasionally correspondence will get leaked, but generally it’s hidden away from prying eyes.

The thing is do we actually blame Redner for its actions? With so much time, money and passion going into a product, when it comes out ripped to shreds it must be shattering. After all, what do these ‘journalists’ know – all it takes is for one small time blogger to lay into the product and the rest of them are jumping on the bandwagon for consistency right?

No one wants to be that magazine, the one which bucks the trend – it’s a sure-fire way of being labelled a review-slut; condemned for being in the pockets of PR departments.

“Good PR is for Pussies”

Facetiousness aside, what was Jim Redner thinking? Was he really that naive?

It's not as thought the media, (and especially the gaming press), is accepting of behaviour like his. The relationship between PR and Editorial is already strained at the best of times. After all, editors just want to see, and talk, to those behind the games while public relations firms have a desire and duty to protect their brands’ image. They currently co-exist in tepid harmony, but they’re always keen on getting one up on each other.

So following the offending tweet, multiple high profile journalists picked it up, archived it and screengrabbed the sentiment. As expected Redner quickly realised that posting in rage on the internet is never a good idea and promptly deleted it. Unsurprisingly, with a hashtag of #AlwaysBetOnDuke attached to it and the fact 1,163 people follow the agency, it didn’t slip through the cracks.

The damage had already been done. Questions started flying. Was Redner himself drunk? Was it just the errant thoughts of someone who tweeted before they’d thought of the consequences? We'll never really know the logic driving the actions, but as soon as the situation blew up Redner did what any good PR agency would do. They activated Crisis Communications mode to explain their actions, apologised and emailed journalists with a personal email.

“I have had a wonderful relationship working with you in the past. I plan to continue working with you in the future on all projects, if you will allow me. I believe reviews are completely subjective. Everyone is welcome to their own opinion and opinions are never wrong. It is not my intention to bully anyone. I over reacted. I just voiced an opinion. I have poured my heart into this project and I just want it to succeed. It is my hope that you understand.”

The above is good crisis control, but it was too little, too late. Grovelling tweets followed (prior to the above response) arguing that it wasn’t the bad reviews per say. After all, these happen all the time. It was more the distinct, intentional hatred being directed at Duke that had peeved him. 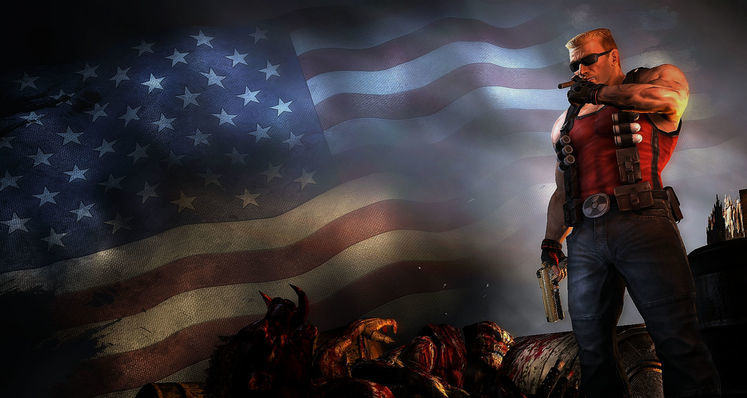 We’ve played the game (we awarded it a 7.0; the press average aggregator we utilise places the final score at a 5.9) and while it’s far from being a polished gen, it’s not without its merits. It’s average. At best.

Obviously some journalists have been uncouth about the product, but their criticisms are widespread and generally agreed on. You can’t control the way people express their thoughts – it’s a fact of life.

What makes this whole situation interesting is the fact it even happened in the first place. Working in Tech PR myself I'm lucky to know what goes on behind the PR curtain. I’m also a freelance writer and understand the concerns of journalists. We do our very best to be transparent and helpful, ensuring that the press can talk to our clients. Bad reviews are part of the industry.

It works both ways. The amusing thing is, and probably unbeknownst to Redner, is that DNF stormed in at number one in the weekly UK charts. The Windows market share was minimal (a sad day considering its roots are on the PC), but overall it managed to get first place without breaking a sweat. It’s not surprising – after all, the time it’s taken to arrive is enough for the legion of fans to amass and want to buy the game out of sheer curiosity, regardless of quality/reviews.

So where does this leave everyone? It makes Redner look childish, PR as a profession rubbish and leaves 2K in a bad way. They’re a major publisher and it’s a PR headache they don’t need, especially from a small localised partner agency.

12 hours have passed since the incident and 2K Games were rightfully swift in their action. They instantly pulled the contract from Redner with the usual impassionate statement of:

“2K Games does not endorse the comments made by Jim Redner and we can confirm that The Redner Group no longer represents our products. We have always maintained a mutually-respectful working relationship with the press and do not condone his actions in any way."

To 2K, Redner did the dirty on them, the gaming press and gamers themselves. With a reputation in tatters, at least for the gaming sector, it’ll take a lot for Redner to recover. We asked Jamie Tarren, a freelance journalist, his thoughts and he was surprisingly compassionate. He stated:

“It seemed a bit harsh of 2K to stop using them, since it was just one person who was too outspoken.”

Generally this is true and the offending executive would find themselves walking the plank, but as it was the agency’s leading man who was spewing the garbage, there’s not much you can do. You can’t fire him from the company, so 2K did the next best thing, they took the account away.

It stands as a terrific example of the power, speed and influence that social media now has. It also shows that people still don’t understand that tweeting in anger can have serious repercussions. Redner, as an expert in PR and modern Marketing, should have known better.

While this’ll unlikely impact on the future reviews of DNF’s sequel (if we’re all still alive for that), it’s a good case study of what not to do with social media and PR. It tells us that people are always watching and that lambasting the media for a subjective opinion is ludicrous. Redner might have been overly demonised, but there’s always got to be a scapegoat in these situations. Lessons should be learned. The sad thing is they won’t be. It won’t be long before another gaffe occurs and a short-lived furore erupts. We’ll be waiting and ready to report on it when it does.

The Speed of Communication

But the interesting thing that comes from the incident is just how fast the internet moves. No sooner had we penned this piece, had further developments occurred. The general journalist community commended 2K Games on its swift movement in distancing itself from Redner.

Yet, if we’re to believe Eurogamer, the predominant gaming website, and its Operations Director Tim Bramwell, 2K Games has done what Redner so tragically threatened. This morning Bramwell, on his Twitter feed, wrote:

“We (Eurogamer) are blacklisted by 2k Games and it seems to be standard practice.”

He also expressed his sympathy for Redner. There’s been no updates since the tweet at 11.15AM BST. He hasn’t gone on record to explain why he’s said such an accusation and there’s been no other activity on his Twitter feed.

If 2K Games is indeed blacklisting companies, it’s a concerning development. It also brings into question whether it used Redner as a scapegoat. Details are murky and social media is hardly the most reliable of sources, but this certainly creates more intrigue.

Further commentary will be provided, if required.