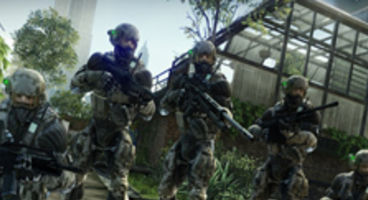 The CryEngine tech is "a very moddable thing," which also works against a safe online experience. On PC there are "lots of hooks" exposed.

These leave it "open to hacking if you're not careful." They've had to go through PC Crysis 2 with a "fine tooth comb" and "close all these doors" tight.

"There was a lot of stuff going on behind the scenes to catch the cheaters at their dedicated servers and just kick them from the game. That's probably where a lot of the effort was," said Crytek lead programmer Mark Tully, talking about the original Crysis.

"What people were seeing was, cheats that were working one day would suddenly not be working the next day even though nothing had apparently changed. It was just the server had been updated." How was Crysis 2 left so vulnerable to cheaters?

Crytek UK developed the multiplayer side of Crysis 2 and simply didn't expect the huge wave of hackers trying to exploit the system. CryEngine 3 itself also gave the cheaters a hand as many of its systems weren't secured properly.

"We did feel like the game seemed to attract a lot of attention from hackers and cheaters," Tully said. "More than we anticipated."

"CryEngine as a whole is a very moddable thing," he explained. "It's a very flexible engine. Particularly on PC there are a lots of hooks that are perhaps left exposed that shouldn't be left exposed, which can leave you open to hacking if you're not careful."

"Obviously with the push onto consoles, which don't really suffer from the same kind of hacking and exploiting to the level they do on PC, it hadn't really been focused on as like, we need to go through the PC version with a fine tooth comb and close all these doors, many of which we weren't specifically familiar with, they weren't ones we'd actually added in multiplayer, but ones that had come with the CryEngine if you will."

"That was probably something we would have benefited from spending time on."

Crytek UK's Pete Hall added: "The things we've done post release are things if we'd thought about it beforehand and known it was going to happen, we could have done those."

"For example, on the PC, people were able to edit some of the data in the game and then go and play online, which wasn't our intention at all. It was as much a bug as anything else. Things like that we would definitely of fixed up in a heartbeat."

Four months after Crysis 2 launched and they're happy with how stable things are.

"We're relatively happy with how things are at the moment," Hall said.

"But there's always the thing with people cheating that they naturally are continually looking for an edge over other players. So new things will come to light and we probably will want to go back and look at them as they do."

"But I don't think there's anything we're aware of at the moment we desperately want to fix." Future titles based on CryEngine 3 won't suffer the same wave of hacks and exploits.

"We've closed most of those now, so I wouldn't expect the same problems for future titles," said Crytek's Tully. "It's an ongoing battle with the hackers. There are a lot more of them than there are of us." Have you had trouble with cheaters online with Crysis and Crysis 2?