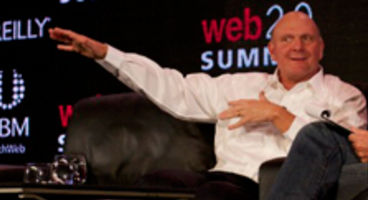 Microsoft's Kinect motion platform for Xbox 360 will lead a wave of innovation, claims CEO Steve Ballmer. A deal has been struck with Sesame Street.

Young TV viewers will be engaged through Kinect, and Kinect will be an 'open platform' for developers to experiment. It was 'always going to open it up'.

“You’re going to see a range of important innovation that will be coming to Kinect on the XBox this holiday season,” Microsoft boss Steve Ballmer said at the Web 2.0 Summit. It was always the plan to have Kinect an open platform to explore, he added.

It wasn't long after Kinect released that very enthusiastic programmers had got the controller-less motion camera working on PC, and had even begun creating little apps for it. Microsoft admits they were amazed at how much interest it had gained.

They promised to release a full PC Kinect SDK for studios and coders to toy with. Microsoft is stepping up their Kinect integration this holiday when the new Xbox Live dashboard releases, and now a deal with Sesame Street hopes to engage younger TV audiences.

Do you believe Kinect will be riding a wave of innovation, videogamer?