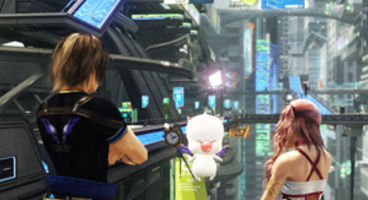 The story is worth between 30 to 40 hours in Final Fantasy XIII-2, reveals the development team. Once completed you can revisit areas to replay as your more powerful selves.

Your taken to the Historia Crux which lets you rewind time. Paradox Endings are only available at this point. The Japanese version is done so the team are all on the international copy.

There's a separate team creating DLC where the first boss is Omega. Monster DLC will be boss fights in a coliseum and those crystallized can be made a party member.

Non-monster enemies and costumes make up other DLC plans for Final Fantasy XIII-2. Square are scheduling the downloadable content for spring 2012 releasing something every two weeks. Final Fantasy XIII-2 releases on Xbox 360 and PS3 December 15th in Japan, January 31st in the US, February 3rd in Europe.