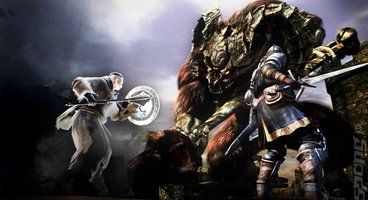 New information regarding Dark Souls, the spiritual successor to Demon's Souls by From Software, has been revealed in an interview with the producers at Dengeki Playstation Magazine. NeoGAF was kind enough to translate the interview, and the following aspects were translated:

* From is nearly the final stage of development of the game, and fan feedback had a strong effect on the game's development, and marketing the game will be difficult because there is the danger of giving away too much information and spoilers.

* Dark Souls is not a story narrative driven RPG, and the main character is an "Undying" who cast himself out from normal society, mainly because he comes back to life even after being killed.

* The Oath System is one of the new elements of the game in which the player explores the world and makes certain discoveries which allows the player to make an oath to a person or regarding some subject. Some of these discoveries can be pretty rare.

* When an Oath is made, it determines the player's position on that topic, and that will impact the player's interactions with other players online. This could mean that making an Oath for something could make you allies with another player, or deadly enemies. The Oath System is not an all encompassing fixed alliance like a MMO Guild, instead it should be thought of as a system which serves as a guide for active roleplaying.

* Healing will be one of the most important game mechanics, and there is a real effort to balance the game so that one must actively seek out healing items, but not make it too frustrating. The Campfire System can be used to create healing items so that beginner players will not find themselves completely stuck when playing the game.

* Dark Souls is going to be a pretty hard game, which isn't surprising considering its predecessor (Demon's Souls), and will have challenging gameplay for the player to discover, learn, and overcome.