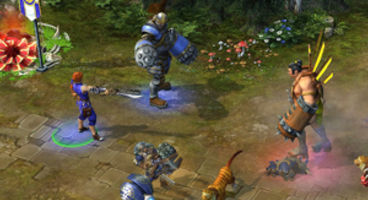 If you're of the female variety, own a Facebook page and love Russian-made MMOs then you're in for a treat lady! There's discounted in-game loot to get, because shopping's your thing right?

Nival plan discounts for female gamers because they want to encourage a better gender ratio. Prime World has male and female exclusive classes designed to promote a balance.

It's not sexist when it's for the ladies, gentlemen. We invented ladies' night didn't we? Teams work better when genders are balanced in Prime World, explain studio Nival.

"The idea is to introduce the MOBA genre not only to hardcore players who already love it, but to their friends who might be more casual, and of course to their sisters and girlfriends who may not be as hardcore," creative producer Larisa Nuretdinova told Penny Arcade.

The plan is to offer discounts on extra female characters. It's 'positive discrimination' to help balance in-game teams.

"To do the very best, you'll want a female player on your team," Nuretdinova continued. "You don't need to have male and female players on the same team to win, but it will certainly help. The game will be connected to your Facebook account, so it will actually be able to check that your real-life gender, and the bonus is only available when a team is made of mixture of male and female players who are playing as characters of the required gender."

It just isn't social when only boys or only girls club together - they have to mix: "When boys gather around to play games just with each other, it's not really social. When girls gather around just to chat, it's not very social. The social starts when they hang out together and play games together."

What do you think of Nival's bid to secure MMO gender balance through inequality?