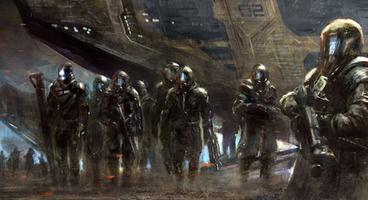 DUST 514, the PlayStation 3 persistent online first person shooter that ties in with the PC MMO EVE Online will now be free-to-play. The game had originally planned to feature a $10-$20 cover fee.

According to executive producer Brandon Laurino, the game was intended to be a free-to-play, microtransaction-funded title, and the cover fee would have been confusing to the PS3 user.

"It's very important as we take steps into this topic to unambiguously state that it is not a pay to win game. There is no micro-transaction that you can do that gives you an unfair advantage over someone who hasn't paid anything. It's the classic micro-transaction dynamic of, 'I can pay and get this item,' or, 'I can invest my time and get this item.' But neither of those options will give me an unfair advantage over the other," he explained.

The game will feature micro-transactions. Players can buy "Aurum credits" in bundles from $10-$100. ISK credits will play a role as it does in EVE Online, but they will be unusable in the DUST 514 store.

What can be purchased include vanity goods to customise appearances, cosmetically different weapons, character respecs and boosters like double skill point (SP) boosters to accelerate leveling. "There is no micro-transaction that you can do that gives you an unfair advantage over someone who hasn't paid anything," promised Laurino.

He added, "We already have hundreds upon hundreds (of micro-transaction items). We have a cache of nearly a thousand different things at this point. Whether or not we expose them day-one is something we're still sorting out. It's like when you make a TV show: you shoot all the episodes in advance, but you don't put them all out on the first day of airing, right?"

The fact the game is free-to-play doesn't mean players will be restricted to non-premium features. According to Laurino, "It's not the classical, 'We're going to have four maps at launch...' We are covering literally a universe of planets, so there's thousands of different maps and they're all available to everyone who's playing. "There won't be some section of the universe that's blocked off. It's really about what you build on those planets - some of those will be earned, some of those will be paid. Again, none will give an unfair advantage, but may have a unique look, or a certain tweak or side-grade."

DUST 514 is due to be released on the PlayStation Network sometime this Summer.