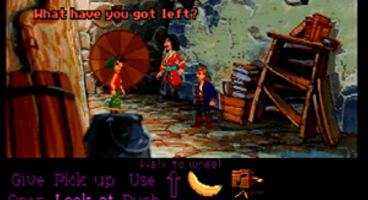 Adventure veteran Ron Gilbert doesn't believe LucasArts would be interested in exploring Monkey Island 3, even if he went to the trouble of getting a Kickstarter project backed for it.

Gilbert doesn't own the rights and so the IP ball is entirely in LucasArts' court. As for the adventure genre itself, Gilbert isn't worried as others are "kind of absorbing" its ways.

The tried and true genre won't be dying out reckons the game veteran, as you can see a lot of what makes that kind of game in other genres today, like in L.A. Noire.

"I’d really love to make Monkey Island 3," Ron Gilbert told IGN. “Unfortunately, I don’t own the rights to that. That all belongs to LucasArts. Even if I started a Kickstarter and I raised like 30 million dollars, I really don’t think LucasArts would sell it.” Nothing will keep the adventuring down and out though. “I’m not worried about it at all,” he said.

“I think a lot of genres are kind of absorbing adventure games. You see a game like LA Noire, and a lot of people think LA Noire is an adventure game because it has absorbed so many elements from adventure games. I don’t think they’ll ever die. They’re very story centric, they’re very character centric. I think people just like those kind of things.”

His favourite element to the adventure genre is its pacing. “I like adventure games because they’re actually slow and contemplative,” Gilbert revealed. “There’s not a lot of fast action and shooting. You’re really working your way through the games. You’re having to think. Some of the best moments for me in adventure games are when I’m just kind of sitting there trying to puzzle my way through something.”

When the Monkey Island creator starts a new adventure game the first things he tackles are the story and world it inhabits, and then he'll start on those tricky brain teaser puzzles.

"I usually start with world, then I start with story, then I layer the puzzles under the story. Because in an adventure game, puzzles are really what drive the narrative forward.”

LucasArts did at least produce HD remakes of the original Monkey Island for fans, and let Telltale Games develop their episodic Tales of Monkey Island back in 2009. As of right now Ron Gilbert is busy at Double Fine Productions working on his new adventure game The Cave.