09 April 2012 | By Jonah A. Falcon
At last night's Gearbox panel, president Randy Pitchford revealed the fifth character class for Borderlands 2, the Mechromancer, who would be the first DLC released for the game. The class is still in the concept stage, but the character appears to be a young cybernetic girl with pigtails, goggles and a robot arm. 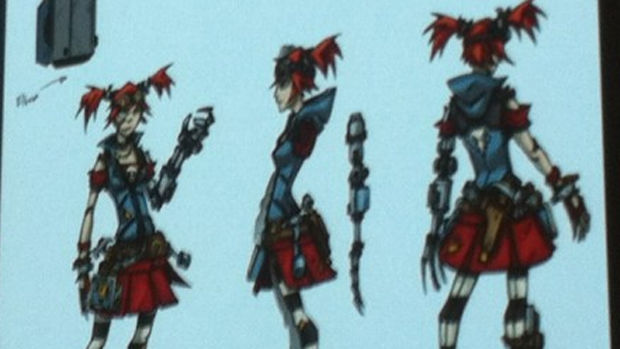 The class abilities include having robot companions, including one called "Deathtrap", which seems to suggest she will have Claptrap robots as allies.

Pitchford reassured the crowd that the content "doesn't exist yet", allaying fears that the class will be content cut from the main game just to sell as DLC, or, worse, alread be on the disc. Regardless, Pitchford also announced the DLC would be free, though he did not mention if it would be free just to new users, with used game buyers having to purchase a one-time code.

Borderlands 2 will be released this September 2012 for PC, Xbox 360 and PlayStation 3.