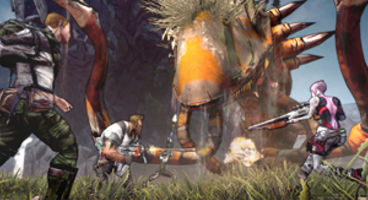 'You.Will. Die. (Seriously.)' That's the name of Borderlands 2's most nightmarish boss rumble according to Gearbox Software, who claim it'll have players royally slapped around.

In fact if you "don't curse the design team at least five times" during the tussle with Terramorphous the Invincible, an incredibly large worm, then "we haven't done our jobs."

In a way 'You.Will. Die. (Seriously.)' is a sequel effort to Borderlands' 'You.Will.Die.' mission from The Secret Armory of General Knoxx DLC, where players took on Crawmerax the Invincible.

That fight needs four players with tip-top gear to defeat the crab worm raid boss. It was the hardest challenge in the original and so Gearbox wants to continue that tradition with a successor. Fans won't need to wait for a DLC launch either as Gearbox want tons of end-game content to keep level 50 players very busy.

"Once you hit that end game, what are you doing? That's what Crawmerax was," Randy Varnell told Eurogamer.

"You can fight Terramorphous multiple times and he's going to drop different loot every time. Some of the best gear in the game, great legendary items, will drop from this guy. He has specific items that only drop from him in the game," he revealed. "There are some legendaries you'll only find from him."

"A lot of the end-game pull is that four-player co-op challenge at a high level against a really tough-to-fight boss. He is designed to be impossible. I'm not going to say he's not soloable, because I know how well gamers break games, but he really is tuned for that end-game, four-player co-op fight, testing your build and your gear and your equipment and your ability to work together as a team. His rewards are great."

"So, if you are that end-game player, this is your challenge right here."

Each of the character classes also get something of a 'game changer' when they hit that final level. For example the soldier Axton can pinpoint his turret wherever the reticule once you gain the Longbow skill, and when paired with a mini-nuclear detonation upgrade it can become a surgical strike.

Salvador the brawler can use his 'Come at me, Bro' skill and give the royal finger to a foe taking all aggro, while he regains full health and gets a damage reduction of 90% for a short while. Maya can use an orb to cover enemies in slag which greatly increases the damage they take, if you can keep said orb from actually striking enemies that is.

Borderlands 2's New Game+ mode is called 'True Vault Hunter Mode' and it changes up enemy AI, outfits them with better gear, adds more to the Badass class and even introduces unique enemies. Fans needn't worry about eventually powering past TVHM monsters as Gearbox wants it to remain forever challenging.

"True Vault Hunter Mode is more than just difficulty. You now need to use all the tools and all of the tricks you learnt in normal mode, and that's how you survive," said lead designer Jon Hemingway, reports Eurogamer.

"We all felt it needed to be more than just turning up the dials. More than just more damage and more health and ta-daa we're done. For example, more enemies have shields. That seems like a really small thing, but it now makes shock more viable. So if you're playing in co-op, get someone with a shock gun and their job is to bring down the shields."

"Enemies will have more armour on them. So don't shoot them in the armour bit. You're going to have to aim a little bit better and hit the sweet spots."

"We've spent quite a bit of time thinking about it. We've given you a whole chest of tools. Now, if you want to survive, use them all. First game, you don't need them all. Have fun, but learn them all. And now it's time to separate the men from the boys. That's what True Vault Hunter mode is all about. It's much more than difficulty. It's tactics."