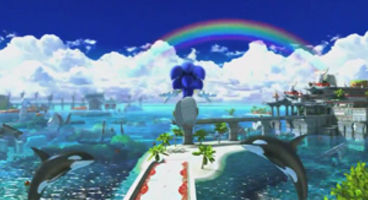 What all the new higher level tech will let the developer do instead is make Sonic's colourful and vibrant world "more convincing" to speed dash through. No photo-real stuff.

"But I'm also interested in the challenge of doing something completely new with the 3D Sonic's forward view platform action, and bring something new to the table with that as well," he continued.

Microsoft and Sony are keeping their next hardware platform tech very close to their chest, but ultimately for Sonic the actual visual look won't be changing except to give us a more colourful world.

"I don't think Sonic will ever become photo-real," Iizuka-san said. "I think Sonic will always remain stylised and will have that bright, colourful world. What the high hardware spec will allow us to do is make that more convincing."

"For example, for Sonic Generations, in the Hedgehog Engine, we used Global Illumination - GI technology - for the lighting system. But increasing the hardware spec will allow us to have real-time lighting calculations, so dynamically changing lighting happening. That's just one example of where the hardware is limiting us in doing what we really could do."

"So by having higher end hardware spec, we'll be able to do, for example, the real-time lighting calculations. That will give more presence to Sonic."

"We're not after realism. We're after making it more convincing. So we're still going for that stylised, bright and colourful Sonic look. We're not going for photo-real," he reiterated.

Meanwhile Sonic won't be having any trouble fitting in with the Nintendo Wii U crowd. "I feel Sonic is the right fit because it is that kind of family experience game. I do feel Wii U is applicable to Sonic. But how we will apply using the controller to Sonic is something we're still thinking about at the moment," explained the Team Sonic big boss.

Have you played Sonic 4 or Sonic Generations? What's your opinion on the 3D forward view action?