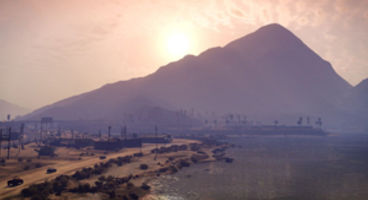 Why would Rockstar target this cycle for Grand Theft Auto V when we're at the cusp of starting the next hardware generation? Dan Houser cites maturity as letting them go "on to the next level."

GTA IV was their "first attempt at a new platform and HD" for Xbox 360 and PS3, and it proved "seriously difficult" to get up and running. Now they know the hardware ins and outs it's "a lot more fun".

Launching titles near the end of a cycle is the best time as it produces the cream of the crop from developers intimate with the platform; they've learnt how to manipulate the tech.

"Rockstar is a content company, not a hardware company," said Rockstar boss Dan Houser in an interview with Japanese magazine Famitsu, translated by Polygon. "We use the technology we have to create content, and we try not to let ourselves get beholden to the hardware."

"The fact that hardware's so mature right now is exactly why we're able to go on to the next level. GTA 4 was our first attempt at a new platform and HD visuals, so the first part of development was seriously difficult. Now we know what the hardware's capable of, so it's become a lot easier to move things along and a lot more fun, too."

"GTA: San Andreas came out at the peak of the PlayStation 2's cycle, and we put out a really good game thanks to that. All the best games for a console come out at the end of the lifecycle, right? So now's the best timing of all."