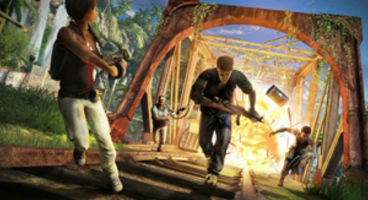 Ubisoft Massive describe their approach to Far Cry 3's multiplayer portion of gameplay, saying that while it's narratively led in co-op, they don't wave it in the player's face breaking singleplayer immersion.

The team doesn't want to remind us of our 'snotty friends' if we'd prefer to be left alone. We can "completely ignore those elements" despite being tied physically into the world.

The Ubisoft team doesn't want stats, achievements and other 'out of place' elements popping up and tearing down Far Cry 3's immersion. Their stat bulletin board is "tucked away somewhat".

All the online features are optional and buried just enough to stay hidden if you don't want to acknowledge them. "I'm a big fan of immersing myself in the single player, and we've been very careful not to force players," said creative director Magnus Jensen of Ubisoft Massive. The studio created RTS legend World in Conflict.

"If you don't want to engage in competitive activities that remind you of the real world, that remind you that you have a snotty friend somewhere that you don't particularly like, you can completely ignore those elements as they're optional."

"As you're going through the world in the single-player, you're in the open world experiencing it: sneaking, hunting, surviving, we're not going to blast pop-ups or achievements that break immersion at the player. It's going to be opt-in so that when you're ready, you can see it." Challenges are accessed in the physical world and not on a menu.

The team are keeping the co-op multiplayer element as ragtag as the singleplayer experience. "We're going very primal in multiplayer, Far Cry 3 isn't just literally colourful its figuratively colourful too," explained Jensen. Co-operative actions such as capturing objectives and aiding a team member earn the right for supply drops. "We've also got four characters in co-op that are, I'd say, as unhinged as any of the characters that players will meet in the single-player."

A huge focus for Far Cry 3 online is the map editor. "We want the good maps to rise to the top so the players can come in and specify what they want to play on. They can play on the cream of the crop, or if act like a beta tester and play on the more experimental maps. We've made that super easy and clear."

The co-op is a "full, custom-made campaign. You're not replaying snippets of the single-player campaign that just happened to fit. It has its own story and characters. It takes place six months before, it has ties into the main story in that you'll meet various factions and you're on a different part of the same island."

"It's a different story but what it does bring is the same insanity. These four characters are working on a seedy private cruise ship, there's drugs and prostitution, these guys are down on their luck, they've hit rock bottom, looking for a chance to get out." Check out the full interview between Magnus Jesen and CVG.