US PlayStation Store update arrives, Scarygirl and The Muppets for LBP2 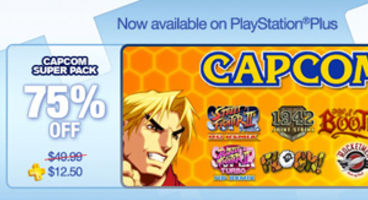 This week's US update to the PlayStation Store releases PSN game Scarygirl, based off Nathan Jurevicius' original graphic novel. It's a side-scroller with "fantastically unique visuals".

New to the DLC shelf is the Mediterranean Map Pack for Assassin's Creed: Revelations and The Muppets level kit for LittleBigPlanet 2. Gotham City Imposters Beta is now live.

PS3 gamers can also now enjoy demos for The Darkness II, PixelJunk SideScroller, UFC Undisputed 3 and of course Scarygirl. Admit it, The Muppets for LBP2 grabbed you.

In this side-scrolling action game, you play as Scarygirl, who is trying to figure out who the man haunting her dreams is. Traverse unique, extremely vibrant, colorful, and magical worlds in a seamless mix of 2D and 3D platforming action. You can go it alone in single-player mode or grab a friend for local co-op play.

Put on your shades and prepare to step into the boots of Duke Nukem, whose legend has reached epic proportions in the years since his last adventure. The alien hordes are invading and only Duke can save the world.

Fatality Lives! The deadliest tournament is back with all the kombatants and their unique fatalaties.

Download the demo for PixelJunk SideScroller today. Dodge flurries of alien bullets and battle your way through hazardous fluid and endless shooting mayhem. You can also retrofit your ship with sophisticated weaponry and search for hidden Power Up items to unleash massive destruction!

Embrace the Darkness and download the demo. Become Jackie Estacado and master your demons as you experience the thrill of Quad-Wielding: slash, grab and throw with your Demon Arms while simultaneously firing two weapons.

In this side-scrolling game, you play as Scarygirl, who is trying to figure out who is the man haunting her dreams. Traverse extremely vibrant, and magical worlds in a seamless mix of 2D and 3D platforming action. You can go it alone in single-player mode or grab a friend for local co-op play. It’s a mesmerizing fairytale, but the creepy-cute tough-as-nails Scarygirl is no damsel in distress! Download this free demo today to see for yourself!

The best selling fighting franchise is back with UFC Undisputed 3. In this demo, play a round in the legendary Octagon and a round in PRIDE Mode, new to the franchise this year!

Download this Muppets Premium Level Kit to expand your LittleBigPlanet 2 experience with the world of the Muppets. Includes 5 new levels, 2 mini-games, the new “Attract-O-Gel” Create feature, new stickers and decorations, and lastly the exclusive Rowlf costume. To download this pack, you must already own LittleBigPlanet 2.

Get alternate costumes for Felicia, Amaterasu, Wolverine, and Rocket Raccoon! Unleash the animal within these ferocious new outfits!

Customize Colors for all characters are available to purchase. *These colors can also be unlocked by playing the game. With the triumphant return of fan favorite characters like Mai, K’, and Vice, extensive refinement of the core fighting engine based on community feedback, and vastly improved network functionality, THE KING OF FIGHTERS XIII represents the HD entry in the series that fans have been waiting for.

Free character for ELEVATOR ACTION DELUXE owners! Vaus from ARKANOID! Enjoy the classic music and sound effects and be prepared for the unexpected!

New wallpapers for all 16 officers of the Wei Kingdom will become available for selection under WALLPAPER.

The Mediterranean Traveler Map Pack extends the Assassin’s Creed Revelations experience with the addition of 6 multiplayer maps. Journey to the holy city of Jerusalem, the Imperial District of Constantinople, and the colorful district of Dyers. Revisit the Italian Renaissance maps from Assassin’s Creed Brotherhood, starting with the historic city of Firenze, traveling to the mountain sides of San Donato, and to spectacular night time Siena.

Convert all uncommon, rare, and mythic rare cards in the “Beknighted” white deck to premium foil cards. Additional content for Magic: The Gathering — Duels of the Planeswalkers 2012.

Convert all uncommon, rare, and mythic rare cards in the “Trinity of Elements” blue, red, and green deck to premium foil cards. Additional content for Magic: The Gathering — Duels of the Planeswalkers 2012.

Fully-unlocked “Beknighted” white deck. Let honor and steel carry you to victory. This deck is packed with Knights dedicated to the craft of battle. With inspiring leadership and martial dominance, your banner will inevitably fly over the battlefield. Additional content for Magic: The Gathering — Duels of the Planeswalkers 2012.

Fully-unlocked “Trinity of Elements” blue, red, and green deck. Haste is the cornerstone of this deck’s battle plan. Your furious assault will keep opponents off-balance until they are defeated. Capitalize on the strengths of three colors of magic and victory will be yours. Additional content for Magic: The Gathering — Duels of the Planeswalkers 2012.

Beyond Reality by SickSystems Theme ($1.99)