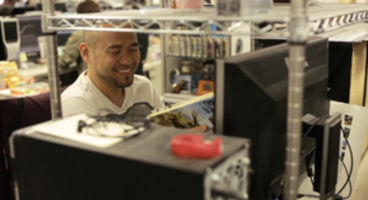 Bayonetta's Hideki Kamiya from Platinum Games has said how big teams working a project don't mean things will turn out great. He cited the big number of devs on Capcom's Devil May Cry 4.

"Didn't help them, did it?" said Kamiya-san. The Platinum co-founder previously worked at Capcom on some of their big franchises like Resident Evil, Devil May Cry and Viewtiful Joe.

Capcom's Resident Evil 6 is an international effort from the publisher where it's alleged that around 600 people have been involved in its development.

Bayonetta was created by a relatively small team compared to the numbers Capcom now throws around their projects, while an amazing difference it doesn't translate to 'impressive'. "I heard there were a huge amount of people working on Devil May Cry 4, just an enormous amount of people," Hideki Kamiya told Edge. "Didn't help them, did it?"

Platinum Games' Tatsuya Minami took a less cutting direction on the difference in applied manpower: "The point is Capcom has the resources to employ 600 people, so good luck to them," he said. At present Platinum Games is developer Metal Gear Rising: Revengeance and Bayonetta 2 as a Nintendo Wii U exclusive title.