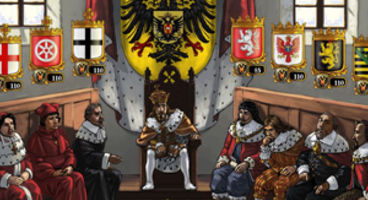 Magna Mundi began life as an extensive mod for Europa Universalis III but had been given a shot to become a full standalone release, however trouble brewed.

"It will not see the light of day under the current set up: Universo Virtual (UV) will not be part of this project any more," posted Mattias Lilja from Paradox. The modding team behind Magna Mundi had contracted their services to developer Universo Virtual who was to help get everything together.

The mod's creators and contributors have since "terminated our contracts with Universo Virtual since we were only ever interested in the fate of Magna Mundi." Lilja gave three reasons for why Paradox decided to pull the plug:

- Lack of progress; we have seen this project drag on and the code we have gotten has not shown significant improvement for many months. Some old and known problems persists and new ones appear with each delivery.

- Lack of trust; the leadership of UV has given a sunshine version of the project to Paradox and reacted with irritation and anger when we have pointed out obvious problems with the deliveries. It has come to a point where they claim the project is done, and the game is ready for release – despite the many critical issues found and reported on our end.

The Magna Mundi team still hope that Paradox will one day resurrect the project.

"We do not know what the future holds. We feel that it takes honesty, openness, and trust to ever build anything worth doing like Magna Mundi. Should Paradox see fit to continue the game in any form, we would gladly offer our services. That is, after all, what we wanted, and still want: to see the fruits of our collective labor," read a joint statement.