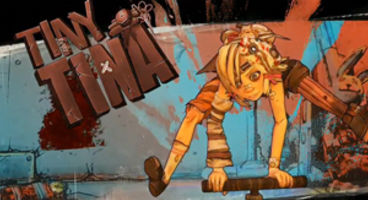 Gearbox Software is, once again, defending something Borderlands 2 related when it comes to the topic of sexism/racism. Points were raised recently that Tiny Tina was a jumble of "stereotyped ebonics".

Studio boss Randy Pitchford said "Tina is not racist". However her creator, lead writer Anthony Burch, acknowledges it as an "interesting point." The team may "alter her dialog" in future content.

“Hey. I really like BL2′s writing, but Tiny Tina’s trope of “white girl talkin’ like them urban folk!!” has got to go," tweeted Cryptozoic Entertainment's Mike Stacco.

"Well, it's not going to," replied Anthony Burch initially. The Cryptozoic dev latter clarified that is "not a matter of offense. the subtext of the character is "black people talk funny". that's a problem". Another twitter user agreed it was an issue: "Its exaggerated stereotypical low class "black" lingo that with Tina amounts to verbal blackface."

Randy Pitchford entered the fray, tweeting to Anthony Burch: "tina is not racist because you are not racist. You're a pillar of tolerance and inclusion." It sparked a minor exchange between users debating no whether Tiny Tina was racist or not, whether specific words were racist or not etc.

"The last thing I want to be is exclusionary or prejudiced, so if Tina truly is problematic I'll change her," tweeted Burch. He was asked if Gearbox would retroactively change Tina's dialogue. "That's not actually feasible within the technical constraints of the game, but I'd alter her dialog in any future BL stuff."

Another user: "Don't edit your whimsy for a couple of f*cking crybabies. It's RACIST to say her words are black," later adding: "Tiny Tina isn't meant to be a 'joke'. She's a slightly insane character orphaned in a war-ridden world."

Will Tiny Tina be sent off for sensitivity training in future Borderlands 2 content? Previously Gearbox go into hot water when they described the new bonus player character as offering a 'girlfriend mode', which draw criticism for sexism, as they 'insinuated' female gamers were far less skilled to keep up and 'needed help'.