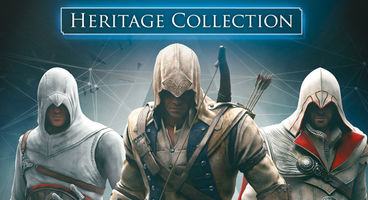 There's also Ezio, the most prolific of all the assassin's to-date, who starred in Assassin's Creed II, Brotherhood and Revelations. The first Animus adventure started in 2007.

Since launch the Assassin's Creed series has sold over 57 million copies worldwide, with the latest Assassin's Creed IV: Black Flag releasing next month. In Black Flag we captain a ship and her crew on a binge of piracy throughout the Caribbean. It's come a long way since hunting a million eagle feathers across the Holy Lands.

· Assassin’s Creed II (Game of the Year Edition): Lead your Brotherhood as Ezio Audtiore in the Italian Renaissance, also containing the Battle of Forli and Bonfire of the Vanities DLCs.

· Assassin’s Creed Revelations: Follow in the footsteps of the legendary Altaïr in Constantinople to close the Renaissance Trilogy.

· Assassin’s Creed III: Challenge the Templar’s supremacy as Connor throughout the American Revolution.

Assassin's Creed IV: Black Flag releases on Xbox 360 and PS3 October 29th in the US, November 1st in EU. It arrives a little later November 19th in the US, 22nd in EU for PC.