Obsidian views Project Eternity as more than just a one-shot 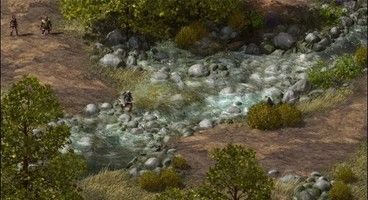 Obsidian's Chris Avellone stated at Rezzed 2013 that the studio isn't viewing their Kickstarter-funded roleplaying game Project Eternity, which raised over $4M in donations from the crowdfunding site and directly from Paypal, as a one-off game.

"We would like to keep it going for as long as (an eternity)," stated Avellone, who added that money, of course, will be the decided factor, saying, "If the first game does well enough and generates enough profit beyond the backer amounts we got..."

Making another game in the Project Eternity series would be easier, since Obsidian already has the engine. "The advantage we would have this time around," Avellone noted, "is we'd be more familiar with the toolset, more familiar with the pipelines. And the energy and resources that are usually spent on programming the systems and getting the framework all set up: they can devote that to creating much more player-seen content - more spells, more ways of casting and reacting to the environment and things like that."

Avellone isn't worried if Project Eternity doesn't make too much money (aside from the raised funds). "The way we structured the plan is I don't think there's ever an instance where it would be put on hold, because as soon as the first game is completed then we're still working on the expansion," he promised.

He then added, "And during that time when we're working on the expansion, we have a good sense for how well Eternity is doing in the marketplace, and if it's doing well then we will have a sequel going on, and if it's not, no worries, at least we delivered what the backers were happy with."

Avellone also expressed a desire to work on a Dr. Who game, and is intent on making a pen-and-paper version of Project Eternity.