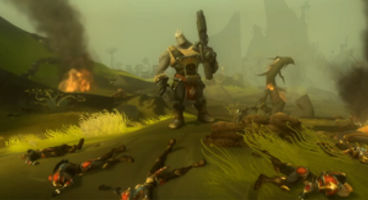 The developer behind WildStar has announced some details about their upcoming sci-fi MMO, which casts players in three defining roles; the soldier, the explorer or the scientist. It releases this year.

They unveil details about the Exile Faction, which is a ragtag bunch of "cast-offs and mercenaries" that first settled Nexus, the world in which WildStar is set. They also talk of the Deradune zone.

This is a zone full of "savage wildlife, both native and introduced." Deradune also plays the part of starting zone for a new race that's to be revealed "next week."

Carbine Studios also talk about two of the 'paths' to follow that suit your play style. The Soldier Path and Explorer Path. "Designed to cater to players who prefer combat gameplay. Soldiers are given special path-specific quests and actions that provide a varied combat experience," detailed the press release.

As for Explorers, it's the "choice for map completionists and in-game orienteers. The Explorer Path is all about getting to that high peak and areas others can’t reach." For more information about Carbine's WildStar check out the official website, and be sure to watch the videos below exploring the latest details.