06 October 2013 | By Jonah A. Falcon
Another of Q-Games "PixelJunk" games will be hitting Steam, as PixelJunk Shooter, which was released back in October 2009 exclusively for PlayStation Network, will be arriving on Steam on the 11th November 2013. The game will cost $8.99 USD.

PixelJunk Monsters and PixelJunk Eden were other games in the PixelJunk series that were formerly exclusive to PSN, but made their ways onto Steam this past year. 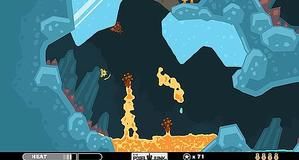