Son of Nor receives new video, devs give walkthrough on powers 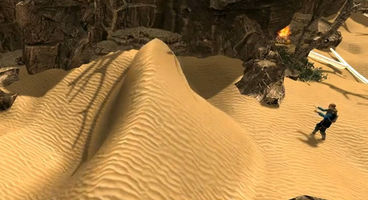 The Kickstarter for Stillalive Studios' Son of Nor has been updated with a 4 minute developer walkthrough explaining the game's controls and mechanics, like how we manipulate the desert world around us.

Telekinesis lets us pick small and big objects, as well as levitate them to use as platforms. There are 22 days remaining on the Kickstarter, with just under $110k left.

The dev team have already revealed their first stretch goal at $170k which will unlock "magical versatility", with PvP multiplayer also a possibility.

Son of Nor also has a Greenlight campaign on Steam with over 3,800 votes their first day. "It is just awesome to see people like our project we put so much passion in!" Stillalive Studios is an Austrian developer and they'll soon be running an Ask me Anything session. Check out the latest Kickstarter update for more.

Son of Nor Essentials